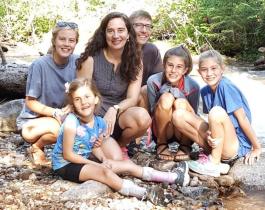 How the UDN helped solve my daughter’s medical mystery

“Science has not caught up with Avery yet!”

That is what we often heard from doctors about our 9-year old, Avery, the youngest of our four daughters.

Avery was a full-term baby and had a perfectly normal birth. When she was just a few months old, we noticed she was not moving as much as our other children had at that age. After discussing with her pediatrician, Dr. Nancy Dickason, at her 4-month checkup, we made an appointment with Dr. Timothy Lotze, a neurologist at Texas Children’s Hospital. Dr. Lotze found Avery had poor muscle tone, which is why she could not sit until age 3 or crawl until age 5, and why she cannot walk and is not verbal even to this day.

Over the next few years, we consulted an army of doctors who conducted innumerable tests on Avery, but they could not find the exact cause of her developmental delays. This was a very difficult time for us, and left us feeling frustrated and helpless.

Eventually, we shifted our focus to finding our “tribe,” a community of supportive friends for Avery and for us, which we found at Arbor School. We were relieved to see Avery thrive and flourish at this school. We connected with parents who were in similar situations of raising a special needs child with an undiagnosed disorder.  Avery also continued to receive physical, occupational and speech therapy multiple times per week.

Life was moving along, until one day, one of our friends with a special needs child informed us about a new initiative established by the National Institutes of Health known as the Undiagnosed Diseases Network (UDN). We were thrilled to learn Texas Children’s and Baylor College of Medicine, right here in Houston, were among the seven clinical institutions in the country participating in this network.

We contacted Dr. Seema Lalani, Avery’s geneticist at Texas Children’s, who presented her case to UDN experts. After some more testing and rigorous vetting, the UDN accepted Avery’s case.

By this time, we had made peace with the fact that science may not ever reach a stage where doctors could reverse our daughter’s motor disabilities, especially since her brain atrophy is significant. But we were still interested in participating in the study with the hope that by identifying the cause of her mysterious condition, researchers may find a way to slow its progression or find a cure to help future Averys. After all, the therapies we are fortunate to have today are a result of decades of research.

The researchers at the UDN did a skin biopsy which was used for sequencing Avery’s exome (a collection of all the genes that get expressed in a person) to find the culprit. Using a combination of exome sequencing of Avery’s DNA, and extensive experiments conducted in fruit flies, a team of researchers led by Dr. Michael Wangler at Texas Children’s Jan and Dan Duncan Neurological Research Institute concluded Avery carried a new type of mutation, a toxic gain-of-function, in a calcium channel gene, CACNA1A. This was a surprising finding. Until this study, most ataxia patients had only been known to carry a loss-of-function mutation in the CACNA1A gene.

This unexpected discovery helped Avery’s doctors to switch her medication regimen to a drug that blocks the calcium channel, which they hoped may successfully slow the progression of her symptoms, and perhaps even restore motor abilities in other younger children with this condition.

Within a few months of Avery’s diagnosis, two more patients at Texas Children’s were found to carry this mutation, suggesting, perhaps, this is not extremely rare and this study may benefit many children in the future.

Despite her condition, Avery has a very fulfilling life. She continues to amaze all of us, especially the doctors, with steady progress in her motor skills. She now has enough strength to roll her wheel chair around the house, and can even scoot herself up and down the stairs. She is adept at using her assistive communication device, iPad, and can flip through TV channels to find her favorite shows. She is a loving child, a sweetheart who loves to go to school and play with her friends, dogs and babies.

Each day we get to spend with Avery is precious and we are extremely grateful for that!