Home » Donate » The DeLuca Family: A Gift for Caroline 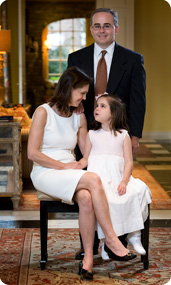 A Gift for Caroline

The prospect of discovering new treatments — or better yet cures — for children like their precious daughter, Caroline, recently led Elizabeth and Anthony DeLuca to make a $1 million commitment to the Jan and Dan Duncan Neurological Research Institute at Texas Children's Hospital.

One Day of Normal

Caroline, now 10, was born "a big strong healthy baby of 8 1/2 pounds," Elizabeth relates. A few hours after birth, the baby briefly turned blue, but the episode did not last long, and mom and baby went home after one extra day in the hospital.

"We had one day — one day — of normal," says Elizabeth. The following morning, Caroline stopped breathing, was rushed to Texas Children's Gordon Emergency Center, and remained in the newborn nursery for three weeks.

With various diagnoses of cerebral palsy, "cognitive delays," "learning issues," and "epilepsy," baby Caroline made very slow progress — and then, her mother says, at 3 1/2, it all just stopped. Caroline began to regress until she was dependent on a feeding tube and suction machine and was in a wheelchair.

"Caroline was just a limp noodle," Elizabeth says. "We had to accept that our baby had a neurodegenerative disease, but nobody knew exactly which disease it was."

Numerous tests and treatments followed while Elizabeth resolutely researched neurodegenerative and neurotransmitter diseases. When Caroline was five, she received a spinal tap at Texas Children's, which uncovered a deficiency of 5-methyltetrahydrofolate, or folate, which is needed by all our cells. There were, at the time, only six other children in the world identified as having this condition.

Fortunately there was treatment, and Caroline began taking Leucovorin. Three weeks later, she walked out of her house, down the driveway, and down the street. "She walked two blocks before she stopped," Elizabeth relates. "She walked until her legs buckled — and I let her. My kids were out there, cars were stopping, our neighbors ran out of their houses to see Caroline walking!"

During her search for answers, Elizabeth asked Caroline's doctors and therapists at Texas Children's, "If you could fix her brain, could she walk?" The response was, "Yes. There's nothing wrong with her nerves and muscles. Her brain misfires and sends wrong information to her body." Medication and therapies are now helping Caroline improve in many ways.

Inspired by the DeLuca Family's story? Make a donation now.