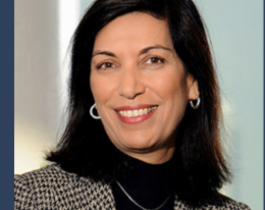 Dr. Huda Y. Zoghbi, the founding director of the Jan and Dan Duncan Neurological Research Institute at Texas Children’s Hospital; Ralph D. Feigin, MD, endowed chair and professor at Baylor College of Medicine; and an investigator with the Howard Hughes Medical Institute; was honored by the BrightFocus Foundation, a nonprofit organization that supports exceptional basic scientific research and provides public education on brain and eye diseases.

Dr. Zoghbi is a leading expert on the genetic causes of several rare pediatric neurological diseases. She has made a series of seminal contributions to basic neuroscience and about inherited neurological and neurodegenerative disorders. Her numerous awards and recognitions include the Gairdner Foundation International Award, Pearl Meister Greengard Prize, National Order of the Cedar, Knight grade which is Lebanon’s highest honors and election to the Institute of Medicine, the National Academy of Science, National Academy of Inventors and American Academy of Arts and Sciences.

Dr. Zoghbi received the ‘Pioneer in Genetics’ honor during the organization’s fourth annual dinner, An Evening of BrightFocus, a gathering held at the Embassy of Italy on June 6th, to spotlight exemplary scientists and advocates who are driving some of the most exciting work around the globe to end diseases of mind and sight. The event was organized to celebrate promising science and bold advocacy to end Alzheimer’s disease, macular degeneration, and glaucoma and included guests from scientific, philanthropic, private, and public sectors.