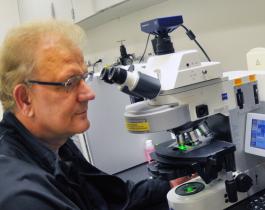 A collaborative study led by researchers at Baylor College of Medicine and the Jan and Dan Duncan Neurological Research Institute of Texas Children’s Hospital improves our understanding of how amyotrophic lateral sclerosis (ALS), also called Lou Gehrig’s disease, develops. A common feature of this progressive, fatal neuromuscular condition is an imbalance between the synthesis and degradation of proteins within cells. When this balance is tipped, excess waste builds up in cells and disease develops. The researchers discovered that mutated ubiquilin proteins that cause ALS fail to regulate the function of lysosomes, a key ‘waste disposal and recycling center’ of the cells.

The study, which appears in the journal Nature Cell Biology, suggests potential new therapeutic strategies for ALS and frontotemporal dementia, neurodegenerative conditions in which specific regions of the brain waste away over time.

“Mutations in UBQLN2 and UBQLN4, genes that encode ubiquilins, have been linked to ALS and frontotemporal dementia, a condition similar to Alzheimer’s disease. Although ubiquilins are known to play crucial roles in various biological processes, there was no clear mechanistic understanding of how ubiquilin loss led to progressive neurodegeneration,” said corresponding author Dr. Hugo Bellen, professor of molecular and human genetics and neuroscience at Baylor College of Medicine and an investigator at the Howard Hughes Medical Institute.

To understand that link, Mümine Şentürk, a graduate student in the Bellen lab and first author of the study, conducted initial experiments in fruit flies lacking the gene ubiquilin. These mutant flies showed signs of progressive age-dependent neurodegeneration, such as impaired neuronal function, death of neurons and increased accumulation of aberrant lysosomes.

In all cells, including neurons, dysfunctional proteins are tagged and sent to a complex called the proteasome that disposes of them. Previous studies had shown that ubiquilins play a key role in this process. However, defects in the proteasome clearing process alone could not explain the dramatic loss of neurons that the researchers observed in these mutants and suggested that some other pathway was perturbed.

Further studies showed that autophagy, another process involved in discarding excess or dysfunctional proteins, also appeared to be defective in ubiquilin mutants.

“This suggested that a combined malfunction in the proteasomal and autophagic clearance mechanisms was responsible for the massive buildup of dysfunctional proteins and eventual death of these neurons,” said Bellen, who also is a member of the Jan and Dan Duncan Neurological Research Institute at Texas Children’s Hospital.

Autophagy is a multistep process. First, vesicles called autophagosomes engulf damaged proteins. Then, autophagosomes fuse with lysosomes, vesicles whose acidic environment activates enzymes that degrade cellular waste. So, the researchers next set out to pinpoint which step of autophagy was being affected in the absence of ubiquilin.

“To our surprise, we found that in these mutant flies, the lysosomes were not acidified, which meant that enzymes that digest cellular garbage could not be activated, leading to waste accumulation,” Şentürk said.

When the researchers fed acidic nanoparticles to the flies to restore the acidic environment inside the lysosomes, clearance of accumulated trash and the normal flow of the process improved.

“Interestingly, we observed the same lysosomal degradation defects in human neuronal cells lacking ubiquilins, suggesting an evolutionarily conserved role for these proteins in regulating the clearance pathways,” Bellen said. “Further studies are needed to test whether acidic nanoparticles also can promote the survival of neurons in the brains of intact mammals. Nevertheless, we are very excited by the initial success of this strategy in reducing the build up of dysfunctional proteins in flies since it could potentially be developed as a novel therapeutic approach to treat ALS and frontotemporal dementia.”