Home » About Us » News » Dr. Zoghbi elected as a fellow of the NAI 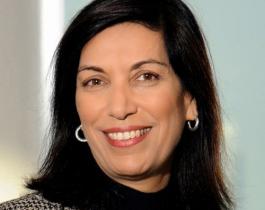 Dr. Zoghbi elected as a fellow of the NAI

Dr. Huda Zoghbi has been elected as a fellow of the National Academy of Inventors this week. Drs. Mary K. Estes, Bert O’Malley and Huda Zoghbi of Baylor College of Medicine were three of the 148 renowned academic inventors who received the distinction this week.

Fellows are selected for having created or facilitated outstanding inventions that have made a tangible impact on quality of life, economic development and the welfare of society.

Zoghbi is professor of pediatrics, molecular and human genetics, neurology and neuroscience and Howard Hughes Medical Institute Investigator at Baylor as well as the director of the Jan and Dan Duncan Neurological Research Institute at Texas Children’s Hospital. Her work has led to the discovery of the genetic causes and biochemical mechanisms of spinocerebellar ataxia and Rett syndrome, findings that have provided insight into the pathogenesis of neurodegenerative and neurological diseases. She and her research team identified mutations in the MECP2 as the genetic cause of the disease and revealed the importance of MECP2 for the function of various neuronal subtypes.

Zoghbi and collaborators also have made many discoveries toward understanding mechanisms driving adult-onset neurodegenerative disorders, such as Alzheimer’s disease, and are now focused on identifying potential therapeutics for these disorders.

Working with animal models in the lab, Zoghbi and her colleagues took a three-pronged approach to help subdue early events that occur in the brain long before symptoms of Alzheimer’s disease are evident. The scientists were able to prevent those early events and the subsequent development of brain pathology in experimental animal models. In the future it might be possible to treat people at risk for Alzheimer’s disease by controlling early events so as to delay disease progression.

The National Academy of Inventors is a member organization comprising U.S. and international universities, and governmental and non-profit research institutes, with over 4,000 individual inventor members. With the election of the 2018 class, there are now more than 1,000 NAI Fellows, representing more than 250 research entities. The 2018 Fellows are named inventors on nearly 4,000 issued U.S. patents, bringing the collective patents held by all NAI Fellows to more than 35,000 issued U.S. patents.

The 2018 fellows will be inducted at the Space Center Houston in April at the Eighth Annual Meeting of the National Academy of Inventors. They will be featured in the Jan. 25, 2019 issue of The Chronicle of Higher Education and in upcoming issues of Technology & Innovation.