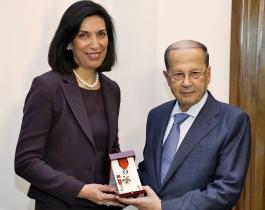 Zoghbi received this award in a ceremony held on Jan. 15, 2018 at the Presidential Palace in Baabda, Lebanon. This award was presented in recognition of Zoghbi’s significant scientific and medical contributions in pediatrics, molecular and human genetics, neurology and neuroscience. Her groundbreaking research led to the discovery of the genetic cause of Rett syndrome and other neurological disorders that have far-reaching clinical implications.

“Dr. Huda Zoghbi is a Lebanese treasure, truly one of the greatest scientists anywhere in the world,” said the Chairman of the AUB, Mr. Philip S. Khoury. “Her devotion to her country of birth and to AUB, the university that educated her, is simply tremendous. We celebrate her as she receives Lebanon’s highest honor.”

Born in Beirut, Zoghbi graduated from the American University of Beirut (AUB) in Lebanon with a bachelor of science in 1976, she received her medical degree from Meharry Medical College in Nashville, Tennessee in 1979, and completed her postgraduate training at Baylor College of Medicine in Houston. She also holds honorary doctorates from Middlebury College, Meharry Medical College, and Harvard University.

“I am deeply honored and humbled to receive this great honor. I owe a lot of gratitude to my family who shaped me and to the institutions that educated me—Makassed and the American University of Beirut. I feel fortunate that I grew up and spent my formative years in Lebanon; I hope that the culture that inspired me to seek knowledge will continue to inspire and empower the youth of Lebanon,” responded Zoghbi.

This distinction follows a long string of prestigious awards Zoghbi has received in recent years, including the 2017 Canada Gairdner International Award, the 2017 Breakthrough Prize in Life Sciences, the Mechthild Esser Nemmers Prize in Medical Science, the 2016 Shaw Prize in Life Science and Medicine, the 2011 Gruber Neuroscience Prize, the 2009 Vilcek Prize in Biomedical Sciences, and many others. Zoghbi is an elected member of both the National Academy of Medicine and the National Academy of Sciences