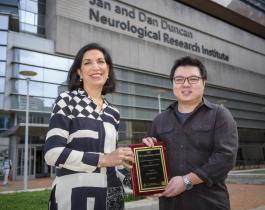 Dr. Jian Zhou was announced as the winner of the 2021 Duncan NRI Zoghbi Scholar Award on September 13, 2021. He received the award from Dr. Huda Zoghbi, director of the Jan and Dan Duncan Neurological Research Institute (Duncan NRI) at Texas Children's Hospital, who established this award in 2017 to honor the many generations of trainees in her lab and to foster the next generation of successful scientists.

The award is open to senior Duncan NRI postdoctoral fellows who anticipate transitioning to independent investigator positions within a year or so. It is intended to provide grant support and mentorship to senior trainees as they begin to develop ideas for their future research programs. The winner receives $50,000 to pursue innovative projects that will form the foundation of their independent research programs, in addition to a personal prize of $3,000. All applicants receive detailed feedback and mentorship to ensure their future professional success from a selection committee that comprises of NRI and Baylor College faculty members, Drs. Mingshan Xue, Mirjana Maletic-Savatic, Meng Wang, Jeannie Chin and Christophe Herman.

Zhou is currently a postdoctoral associate in the Zoghbi lab. In the future as an independent researcher, he is interested to investigate the molecular and neuronal basis of neurodevelopmental disorders with the ultimate goal of identifying novel therapies. In his award-winning research proposal, he outlined his plan to examine the role of the autism risk gene Transcription factor 20 (TCF20) in activity-dependent signaling pathways in mice during complex behaviors, and to determine its role during brain development. These studies are expected to uncover mechanisms involved in the pathogenesis of TCF20-associated neurodevelopmental disorders (TAND) and to identify the best time window to administer potential treatments during brain development. Finally, he is hopeful these studies will provide an opportunity to answer the fundamental question of how activity-dependent signaling networks regulate brain development.

Detailed information about the award application and selection process can be found here.