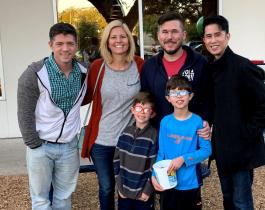 Giving Tuesday donations to support SETBP1 research at the NRI

SETBP1 disorder is a rare genetic, neurodevelopmental disorder caused by a mutation or microdeletion within the SETBP1 gene. There are currently no treatments or standard of care for individuals with SETBP1 disorder.

Austin, TX - (February 26, 2021) - On December 1, 2020, people from all over the world came together to virtually support and donate to beloved non-profit organizations. The SETBP1 Society received over 400 donations resulting in nearly $50,000 in funds raised, making this their largest Giving Tuesday fundraiser to date. These contributions have created an opportunity for SETBP1 Society to advance a preclinical research initiative with Dr. Rodney Samaco, assistant professor of molecular and human genetics, and team at the Baylor College of Medicine and the Jan and Dan Duncan Neurological Research Institute (NRI) at Texas Children’s Hospital.

Clinical research for rare diseases takes time, but so does the networking required to find and encourage the appropriate team to take on a project. As fate would have it, while attending the 2019 Global Genes Rare Summit, SETBP1 Society founder and President Haley Oyler was in the right place at the right time.

“After a long day at the summit, I headed back to my hotel room and overheard a fellow researcher engaged in a conversation with a Summit attendee. I had not planned to stop and interrupt until I heard, ‘I’m from Austin, Texas.' With my lab and team being based in Houston and family in Austin, I felt the urge to turn around and introduce myself. It turned out to be Oyler,” shared Samaco.

With this introduction, SETBP1 Society and the Baylor-NRI team began working in lock step to move forward together with ongoing plans to procure the genetic mouse models under development by Jackson Laboratories. “As soon as the mouse models were available in mid-2020, we quickly deployed a timeline to help establish the phenotype of the SETBP1 disorder mouse models,” Oyler said.

With the generous funds raised on Giving Tuesday, the SETBP1 Society and Samaco’s group will “plant the seeds of hope” by building upon their current results in search of preclinical endpoints or biomarkers with significant relevance to the features of SETBP1 disorder.

The driving force behind Samaco’s work and passion is to create and build positive momentum toward therapies for rare genetic disease. “In the last five years alone, we have seen remarkable advances in the rare genetic disease space,” said Samaco. “Establishing partnerships with advocacy groups – at the onset of research initiatives – strengthens infrastructure and capacity, and ensures a culture of equity, access and hope. The voice of the patient and caregiver becomes a true seat at the decision-making table.”

About SETBP1 Society: SETBP1 Society is an internationally focused volunteer 501(c)(3) organization based in the US with a mission to provide support to individuals with SETBP1 disorder and their families, to promote discussion and fund research, and to bring awareness and education to the public.