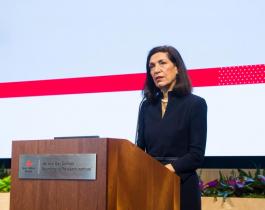 During the final week of October, Texas Children’s Hospital hosted visitors from around the world for a very special Rett Syndrome Symposium and Workshop.

The two-day event was momentous for many reasons. It was the inaugural meeting held in the stunning new Auditorium and Conference Center at the Jan and Dan Duncan Neurological Research Institute (Duncan NRI) at Texas Children’s Hospital. It fortuitously coincided with Rett Syndrome Awareness Month. And the symposium also marked the 20th anniversary of the discovery of the underlying cause of Rett syndrome. In 2000, NRI director Dr. Huda Zoghbi’s research team made the pioneering discovery that loss-of-function mutations in methyl-CpG binding protein, MECP2, were the underlying cause of Rett syndrome.

The symposium opened with a warm welcome from co-organizers Dr. Adrian Bird – Buchanan Professor of Genetics and Welcome Trust Center for Cell biology at the University of Edinburgh, UK – and Zoghbi, who is also a professor at Baylor College of Medicine and Howard Hughes Medical Institute investigator.

“The purpose of this event was to bring together researchers who work on Rett syndrome and leaders from related areas of neuroscience working in academia, industry and government, to think deeply and spark new ideas,” said Zoghbi. “The hope is that out of the work and discussions that happened here, in five years, when we’re marking the 25th anniversary of the gene discovery of Rett syndrome, we’ll also be celebrating new treatments for people with Rett syndrome.”

The international symposium was sponsored by Rettsyndrome.org (formerly the International Rett Syndrome Foundation) and the Rett Syndrome Research Trust. The multidisciplinary group of attendees included scientists, physicians, members of the lay public, and representatives from the National Institutes of Health, the pharmaceutical industry, and several foundations, all brought together to look at Rett syndrome with a fresh, new perspective.

Following a day of stellar research presentations, the investigators split into three working groups that focused on Molecular Pathogenesis, Therapeutic Approaches and Young Investigators. The groups discussed the information presented over the course of the day and their vision for the future of Rett syndrome research. This included the systemic and technical challenges that currently exist, and the group brainstormed ways to overcome those. The next morning, key points from these discussions were shared with the audience.