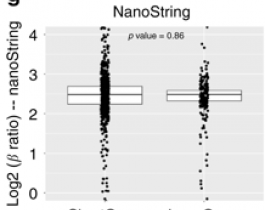 Many recent large-scale transcriptome studies have shown that long genes (>100 kb) are preferentially dysregulated in neurodevelopmental disorders. A recent study from the laboratory of Dr. Zhandong Liu, associate professor at Baylor College of Medicine and investigator at the Jan and Dan Duncan Neurological Research Institute at Texas Children’s Hospital shows that expression of long genes is not preferentially altered in MeCP2 syndromes.

The paper published in Nature Communications arrived at this conclusion after rigorous statistical analysis that reduced variability (‘noise’) and retained only authentic long gene effects (‘signal’). The method described in the study will help researchers verify the accuracy of subtle long gene effects and thereby, shape the direction of research and development of potential drug targets for many neurological disorders.

Many neurodevelopmental disorders are caused by misregulation of master regulatory genes that control the expression and activity of thousands of downstream target genes. Preferential dysregulation of long genes in neurodevelopmental disorders such as autism, Rett syndrome, Fragile X syndrome, Angelman syndrome has been a recurring theme in many large-scale gene expression studies.

In recent years, there has been increasing interest among researchers to explore this phenomenon for mechanistic and drug targeting studies. Researchers in the Liu lab were intrigued by this trend and wanted to test if this was indeed an authentic causal relationship or a result of genetic or experimental variability. They were particularly interested in cases like MeCP2 syndromes where the degree of bias was fairly subtle.

Their first task was to estimate the extent of background variation (‘noise) in the large datasets that had been analyzed previously. Ayush Raman, a graduate student in the Liu lab and the first author of this study, scrambled gene expression data obtained from cortical neurons of mice. The data was divided into ‘control’ and ‘experimental’ groups and the researchers looked for correlations between gene length and changes in gene expression patterns. Since these neurons had the same genetic background and had received identical sham-treatment, the researchers expected to see no correlation between gene length and changes in gene expression. However, surprisingly, they saw preferential downregulation of long genes.

This suggested that some of the original observations about the effects of long gene could be attributed to normal genetic variation in the population and needed to be reevaluated.

Next, using this background variation (‘noise’) as the baseline, they analyzed the gene expression changes in 15 publicly available datasets of MeCP2 studies across 28 different tissue types. Loss of MeCP2 function results in Rett syndrome whereas its overexpression results in another neurological condition, the MeCP2 duplication syndrome. Previous studies on rodent models have shown that loss of MeCP2 (knockout, ‘KO’) function causes preferential upregulation of long genes while gain of MeCP2 function (transgenic, ‘Tg’) leads to preferential downregulation of long genes. So, Liu’s team performed this in-depth analysis to explore the extent to which long genes contribute to neuropathology in these syndromes.

Interestingly, after applying this rigorous statistical treatment, they found no preferential upregulation or repression of long genes in MeCP2 disorders. In fact genes of varying lengths were found to be altered in MeCP2 KO and Tg mice, suggesting that length of MeCP2 target genes does not contribute to the neuropathology in MeCP2 syndromes.

Thus, this study shows that not all neurodevelopmental disorders can be attributed to changes in expression of long genes and urges researchers to perform rigorous statistical analysis before linking gene length to pathological symptoms.