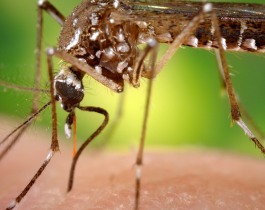 New insights into how dengue and Zika viruses cause disease reveal shared and virus-specific mechanisms. An international, multi-institutional team led by researchers of the University of California, San Francisco and Baylor College of Medicine report in the journal Cell that these viruses counteract a human and mosquito immune defense mechanism and hijack specific host proteins for virus replication. They also discovered that Zika virus causes microcephaly in fruit flies by disrupting the function of ANKLE2, a protein involved in brain development both in flies and humans. These findings open new avenues to design therapeutic strategies to combat these widespread and severe infectious diseases.

“In this study, we collaborated with Dr. Nevan J. Krogan and Dr. Priya Shah at the University of California, San Francisco to better understand the mechanisms of  dengue and Zika virus infection,” said co-corresponding author Dr. Hugo Bellen, professor of molecular and human genetics and neuroscience at Baylor College of Medicine and an investigator at the Jan and Dan Duncan Neurological Research Institute at Texas Children's Hospital and Howard Hughes Medical Institute.

The researchers conducted systematic comparative analyses of the interactions of proteins from dengue and Zika viruses with proteins from the host, both mosquitoes and humans. They discovered new strategies the viruses use to successfully infect their host. For instance, they found that some viral proteins counteract interferon response genes, a human and mosquito defense mechanism, and that other viral proteins hijack host proteins and redirect their activities to replicate the virus.

In addition, the researchers combined their systematic comparative analysis with experiments with the fruit fly animal model and discovered an intriguing mechanism that can explain infant microcephaly associated with maternal Zika virus infection.

The Bellen lab combines the versatility of the fruit fly with modern molecular biology techniques to answer important questions about genes and disease. The technology has allowed scientists to determine the role of a gene and the corresponding protein in cells where the gene is expressed and whether the loss of the gene may be associated with human disease.

“We have altered thousands of flies and systematically characterized the expression and function of genes in great detail. In a previous study, we combined this approach with analyses of human genes not yet linked to human disease. We found that mutations in the ANKLE2 gene can cause microcephaly both in humans and fruit flies. Microcephaly caused by lack of ANKLE2 is very similar to the one caused by Zika virus,” said Bellen.

In this study, the researchers discovered that the Zika protein called NS4A binds to ANKLE2, the human protein linked to microcephaly.

“We found that if we overexpress NS4A in normal flies, the result is reduced size of the fly’s brain. This can be rescued by overexpressing human ANKLE2 in the flies,” said co-first author, Dr. Nichole Link a postdoctoral associate in the Bellen lab. “Taken together, the evidence suggests that when the Zika protein NS4A interacts with ANKLE2, it disrupts its function in brain development in ways that can lead to microcephaly.”

Link adds that “these findings also suggest that, if we could develop a drug that could prevent NS4A from binding to ANKLE2, we might be able to prevent Zika virus from causing microcephaly.”