A novel neurological disorder associated with the Polycomb complex identified 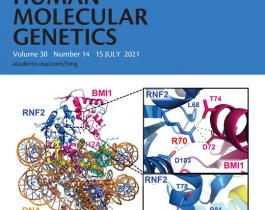 The UDN is a National Institutes of Health-funded research study that brings together clinical and research experts from across the United States to solve the most challenging medical mysteries using advanced technologies. This often involves severely affected patients who, despite years of testing, are unable to get a definitive diagnosis for their medical problems – the crucial first step towards receiving appropriate treatment, support and clinical care.

This study was initiated with the enrollment of an adolescent female patient with the above-mentioned symptoms at one of the UDN’s Clinical sites at Duke University. Initially, researchers at Dr. Shashi’s lab at Duke performed a whole slew of genetic tests, all of which came back negative. Next, they performed trio whole-exome sequencing, a relatively newer sequencing technology that compares the DNA sequences of the parents and the affected individuals to identify a potential genetic alteration that might explain these symptoms. Using this method, they found this patient carried a rare mis-sense variant in the RNF2 gene, which was not present in genomes of either parent, indicating that the mutation arose spontaneously in the patient’s genome.

RNF2 belongs to a large family of evolutionarily conserved Polycomb group genes that encode about 20 proteins critical for brain and skeletal development and function. Mutations in 12 genes that encode proteins of this complex are known to be associated with neurological disorders. However, RNF2 variants had never been linked to a disease before. To identify more patients with this new mutation, the team utilized GeneMatcher, a web tool developed as part of the Baylor-Hopkins Center for Mendelian Genomics for rare disease researchers. This helped them find a younger female patient in France who had a different mis-sense variant in the same gene and suffered from similar symptoms. This was an exciting finding because it suggested that variations in RNF2 were the likely culprit behind these patients’ symptoms and linked RNF2 to a novel neurological disorder. However, to firmly establish a causal relationship between RNF2 variants and the new disease pathology, they needed to better understand the biological consequence of the variants found in the two patients, ideally in an in vivo animal model.

The UDN’s Model Organisms Screening Core (MOSC) led by Drs. Hugo Bellen, Shinya Yamamoto and Michael Wangler at the NRI and Baylor carried out this task by using the fruit fly, Drosophila melanogaster. Fruit flies are excellent model systems to test the function of variants identified in disease patients, and MOSC researchers have used this strategy to identify more than 20 new disease gene discoveries in the past few years. When the MOSC team expressed mutated versions of this gene in fruit flies, they were unable to functionally rescue i.e., compensate for the loss of function of this gene, which is in contrast to what they observed when they expressed the normal version of this gene in flies.

“Using fruit flies as a ‘living test tube,’ we demonstrated that loss-of-function mutations in RNF2 were likely the molecular cause of the symptoms in the two patients,” Yamamoto said. “This makes RNF2 the thirteenth Polycomb group gene to be linked to human disease. Although the incidence of each of these dozen diseases that arise from mutations in Polycomb genes is very rare, it is likely they share similar underlying pathogenic mechanisms. Therefore, we propose the term ‘polycombopathies’ to group and study them together.”

While further studies will be needed to better define the clinical spectrum and pathologies of this disorder caused by RNF2, the team is particularly excited by the future therapeutic possibilities that this investigation has opened up.

“Many drugs that modulate the activity of Polycomb group proteins and their interacting partners are currently being studied in the context of various cancers and there is mounting evidence pointing towards convergence in the disease pathologies of cancer and rare neurological diseases at the molecular level, which will greatly facilitate our goal to find therapies for ‘Polycombopathies”, Yamamoto added.