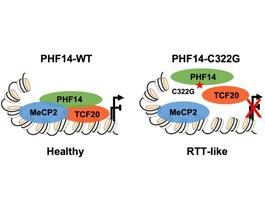 Distinct mutations in the methyl-CpG-binding protein 2 (MECP2) gene are known to result in Rett syndrome (RTT), MECP2 duplication syndrome (MDS), and other neurodevelopmental disorders, which present with overlapping symptoms like autistic behaviors, epilepsy, intellectual disability, and motor dysfunction. The researchers at Texas Children’s Hospital and Baylor College of Medicine have now discovered a novel protein complex that modulates MeCP2 function and offers insight into the molecular mechanism involved in the pathogenesis of these MECP2-mediated disorders. The study was led by Dr. Huda Zoghbi, director of the Jan and Dan Duncan Neurological Research Institute at Texas Children’s Hospital, Howard Hughes Medical Institute investigator and professor at Baylor College of Medicine, and was published in the Proceedings of the National Academy of Sciences.

Dr. Zoghbi and her team pioneered the discovery of the genetic cause of Rett syndrome. In 1999, they showed that loss of MECP2 function causes Rett syndrome. In 2004, they found that duplication of the MECP2 gene also leads to progressive neurological problems. Although the genetic basis of these MECP2-associated disorders is known, the precise mechanism underlying disease pathogenesis has remained a mystery. While studies from the Zoghbi lab and others have demonstrated that MeCP2 regulates the expression of thousands of genes, the protein itself does not possess a functional domain to independently regulate gene expression. “It was, therefore, critical for us to identify the molecular players that interact with MeCP2 to co-regulate the downstream events,” postdoctoral fellow in the Zoghbi lab and lead author of the study, Dr. Jian Zhou, said.

Almost all cells in an organism contain the same set of genes. However, not all genes are expressed in every cell or organ in each stage of an organism’s life. When a gene is not expressed, DNA is packaged into a tightly coiled, highly compact structure called chromatin. When a particular stretch of DNA is ready to be expressed, chromatin remodeling proteins open it up and transcription factors and other co-regulators convert it into messenger RNA (mRNA), which is then converted to a protein.

When, where, and how much a gene is expressed is highly regulated and is monitored in several ways. The addition of methyl groups to cytosine residues in a particular region of DNA is one such mechanism that regulates gene expression. The presence of methyl groups on the DNA blocks the recruitment of transcription factors and prevents the expression of that gene or a group of genes controlled by that region of the DNA. Previous studies have shown that MeCP2 acts as a bridge between methylated DNA and the proteins that regulate chromatin remodeling and transcription.

To search for proteins that interact with and regulate the function of MeCP2 in vivo, researchers in the Zoghbi lab used a method known as biotin identification followed by mass spectrometry (BioID-MS). This method can identify highly specific and physiologically relevant interactions between neighboring proteins. The team performed this technique in cultured neurons obtained from rodent brains and identified five candidate proteins that interacted with MeCP2 when bound to DNA. Interestingly, they found that two of these candidate proteins and two other proteins bound to each other to form a stable new complex they termed, the TCF20 complex.

In addition, they found that the mRNA transcripts of MECP2 and TCF20 genes were expressed at the same intracellular locations and during the same developmental time windows in the mouse brain and also co-regulated similar neuronal genes and pathways.

Furthermore, they found that the presence of certain mutations in the MECP2 gene that had been previously implicated in the pathogenesis of Rett syndrome disrupted the interaction between MeCP2 and TCF20 complex. These findings underscore the importance of MeCP2-TCF20 interactions during normal brain development as well as TCF20’s role in the pathogenesis of Rett syndrome. Interestingly, the researchers also observed that reducing TCF20 levels relieved some anxiety-like and abnormal social behavior as well as learning and memory deficits seen in mice with extra copies of MECP2.

“About 3-5% of children in the US suffer from some type of neurodevelopmental disorder, many of whom present with shared symptoms,” Zoghbi said. “While large-scale sequencing and bioinformatics approaches have led us to the genetic mutations underlying some of these conditions, a combinatorial approach that couples protein interaction analysis with genomic/genetic studies in disease models, remains critical to understand the pathogenesis of these disorders. The discovery of the TCF20 complex and its interplay with MeCP2 advances our knowledge of how MECP2 disorders develop and highlights some of the molecular changes that drive their shared symptomology.