Home » About Us » News » Our HADDS Journey: A Mother’s Memoir 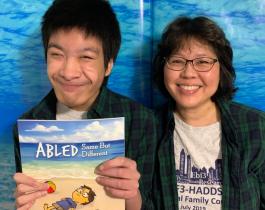 Our HADDS Journey: A Mother’s Memoir

For Cathleen Morita, Mother’s Day weekend in 2003 sparked the first day of an amazing journey. It was the day her son, Chase, quietly came into this world. Soon after his birth, Cathleen waited patiently for a cry or even just a little sound from Chase. When large amounts of fluid were being aspirated from his lungs, Cathleen knew something was wrong – some call it a mother’s intuition.

“When I held Chase for the first time, he felt really floppy,” Cathleen said. “As a newborn, he slept a lot and didn’t cry when he was hungry. After he was fed, he couldn’t hold fluids down – it would come out of his nose and had to be aspirated at the end of each feeding.”

At three months old, a pediatric neurologist diagnosed Chase with hypotonia (low muscle tone), strabismus (crossed eyes) and undescended testes. While these symptoms hinted at an underlying problem, doctors did not have a definitive diagnosis. At this point, Cathleen decided to take an indefinite leave of absence as a full-time elementary school teacher to help her son.

Chase had difficulty eating, holding his head up, rolling over, sitting up, creeping, crawling, standing and walking. He received early interventional physical therapy, occupational therapy and speech therapy. The therapists who provided at-home services guided Cathleen on how to help her son reach these milestones. Chase also participated in music and equine (horse) therapy.

“Initially, I was told Chase might be wheelchair bound but I was persistent he should try to learn to walk on his own,” Cathleen said. “After Chase could bear weight and cruise around holding on to furniture, we got him fitted for an Ankle-Foot Orthosis (AFO). With a lot of practice, Chase learned to navigate his surroundings using a walker. With the help of DVDs, we learned sign language as a means to communicate and how to use various adaptive communication devices.”

Chase had surgeries to correct his congenital esotropia (crossed eyes) and undescended testes. Throughout childhood, he also suffered from allergies, constipation and incontinence. Cathleen consulted with a couple of neurologists and a geneticist to determine the root cause of her son’s health issues. After six years of visiting countless specialists – with no diagnosis for Chase – Cathleen applied to the National Institutes of Health Undiagnosed Diseases Program – which is part of the Undiagnosed Diseases Network (UDN) – to find an answer to her son’s mystery illness. A year later, he was selected to participate in a clinical research study. Despite difficult family circumstances, Cathleen made sure Chase could continue to participate in this program and was amazed by his resilience.

Finally, in 2017, there was a name for Chase’s mysterious illness. Chase had a novel disorder called EBF3-related Hypotonia Ataxia Developmental Delays Syndrome (HADDS) caused by changes in the EBF3 gene, which is why his doctors were unable to arrive at a diagnosis earlier. Chase’s mom is thankful for the tremendous efforts of Dr. Hsiao-Tuan Chao, a pediatric neurologist and investigator at the Jan and Dan Duncan Neurological Research Institute (NRI) at Texas Children’s, and her team’s collaboration with the UDN for finding a diagnosis for Chase.

My inspiration for a children’s book

“Many times when I was out and about with Chase, I noticed adults stared at him; some would even ask me what he had as if he had some kind of contagious disease,” Cathleen said. “To cope with this sense of isolation, I started journaling about his daily life. I knew many of these people did not mean to be unkind, but it was their lack of awareness about Chase’s condition.”

As a teacher, Cathleen taught her students to have empathy and compassion for others who may appear to look or do things differently. Since she could never find a book that conveyed that message about children like Chase, Cathleen shared pictures of him doing things he enjoyed when he was their age. She would get a lot of questions about why he had to use a walker, wheelchair, wear glasses, use a tablet or do sign language to talk. These discussions led to the understanding that although Chase did things differently, he had the same interests as anyone else and should be treated with “aloha” kindness. This inspired her to write a children’s book.

Putting her thoughts on paper, Cathleen came across a very talented local illustrator, D.H., who was able to make her words come to life. The book, ​Abled: Same But Different​ was driven by her passion to share her experiences with others and to educate people about EBF3-related HADDS.

Cathleen shared her son’s story with several members of the HADDS Foundation and was introduced to Andy Spencer with Engedi Publishing. Through Andy’s guidance, collaboration and the Foundation’s financial support, Chase’s story was published in the summer of 2020.

Last summer, with the encouragement of her family and with their financial support, Cathleen and her now 17-year-old son, Chase, attended the very first HADDS Family Conference organized by the HADDS Foundation. She was able to connect with other families of children, teens and young adults diagnosed with EBF3-related HADDS. She and her family also met Dr. Hsiao-Tuan Chao, Dr. Michael Wangler, their team at the EBF3-HADDS Clinic at Texas Children’s, and toured Dr. Chao’s laboratory at the NRI.

“I am grateful to Texas Children’s and the Undiagnosed Diseases Program at the National Institutes of Health (NIH) for their support in helping my family find a diagnosis for my son’s rare illness,” Cathleen said. “I hope Chase’s story will inspire people to show compassion for others who may appear to look or do things differently.”

Many patients like Chase are referred to Texas Children’s because of our expertise and specialization in the diagnosis of diseases that are rarely seen and often unrecognized. Click here to learn more about the NRI and Texas Children’s, one of several clinical sites in the country that evaluate patients enrolled in the Undiagnosed Diseases Network