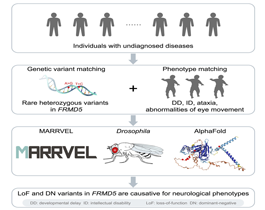 A study led by Dr. Hugo Bellen, investigator at the Jan and Dan Duncan Neurological Research Institute (NRI) at Texas Children’s Hospital (TCH) and distinguished service professor at the Baylor College of Medicine (BCM), reports de novo variants in a gene involved in regulating cellular motility to be the underlying cause of a new neurological disorder. The study was published in the American Journal of Human Genetics.

In this study, researchers elucidated the biological role of FRMD5 and demonstrated an association between alterations in FRMD5 function - a member of the FERM (four-point-one, ezrin, radixin and moesin)-domain containing proteins (FDCPs) that regulate membrane dynamics, cellular movements and migration - and a novel neurological disorder in humans. The study provides a solid foundation for future explorations of FRMD5 and its partners that can lead to a therapy for this novel disorder.

The human genome has about 50 FDCPs, which are known to regulate a variety of cellular processes. However, less than 20 FDCPs have been reported to be associated with human diseases, and the biological role of other family members including FRMD5, is not well-understood.

In this study, researchers identified eight individuals who presented with similar neurodevelopmental symptoms such as developmental delay, intellectual disability, motor dysfunction (ataxia), abnormal eye movements, and seizures. Interestingly, they all have rare point mutations in one copy of the FRMD5 gene. They identified seven different variants in FRMD5 in eight individuals. Statistical modeling analysis predicted that these variants could be potentially deleterious and either loss of one copy of this gene or the presence of a toxic version could cause the symptoms observed in these patients.

To investigate the function of FRMD5 gene in vivo and to find how changes in its function can cause the observed symptoms in these patients, the team conducted in-depth studies of dFrmd (CG5022) - the fly version - which shares significant conservation with the human FRMD5 gene.

Since dFrmd had not been studied previously in fruit flies, the researchers first generated transgenic loss-of-function mutant flies as well as reagents to determine the expression pattern of the gene. They found that, like the human FRMD5 gene, the fly version is primarily expressed in the central nervous system. Specifically, dFrmd is expressed in neurons rather than glia.

“The dFrmd loss-of-function mutant flies we generated were viable and fertile, and did not exhibit any obvious morphological defects,” said Dr. Shenzhao Lu, a postdoctoral associate in the Bellen lab and first author of this paper. “However, upon closer examination, we found that these mutants were highly sensitive to heat-induced seizures and that their photoreceptor neurons did not communicate well with the connecting neurons.  Both phenotypes were rescued with the human FRMD5 reference gene. The FRMD5 variants were also tested, but they show reduced rescue ability.”

The seizures observed in these flies are consistent with the symptoms observed in the patients. Moreover, the ability of the normal FRMD5 protein, but not the variants, to revert the phenotypes associated with the loss of the fly gene, suggests that the observed neurological defects in patients are likely due to the altered function of the FRMD5 function. Further analysis showed that these FRMD5 variants can behave in a dominant-negative fashion. In summary, the variants exhibit loss-of-function properties as well as dominant-negative effects.

“In the past few years, using a unique multidisciplinary approach that combines clinical genomic sequencing and functional testing in model organisms like fruit flies, we have been able to successfully identify a large number of novel neurological diseases within a short time,” Dr. Bellen said. “Notably, many of these diseases are due to mutations in genes that had not been previously studied in flies or model organisms since their loss did not yield strong or visible symptoms and were therefore unlikely to have been identified as interesting candidates by classical genetic screens. Thus, our approach not only helps provide a molecular diagnosis for patients but also reveals the function of novel, evolutionarily conserved genes, that have so far remained uncharacterized.”