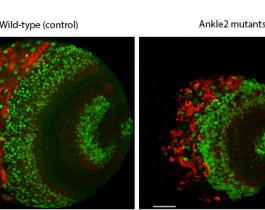 Microcephaly is a birth defect in which a newborn has a significantly smaller and under-developed brain. Although several inherited genetic mutations and environmental factors such as maternal malnutrition, in utero infections (e.g. Zika virus), exposure to alcohol or toxic drugs and fetal injury are known to cause microcephaly, very little is known about the underlying causative mechanisms. A new study from the laboratory of Dr. Hugo J. Bellen, professor at Baylor College of Medicine, investigator at the Howard Hughes Medical Institute and Jan and Dan Duncan Neurological Research at Texas Children’s Hospital has uncovered a novel genetic pathway that causes microcephaly in infants and have identified promising therapeutic targets. The study was published today in the journal Developmental Cell.

The researchers identified a novel evolutionarily conserved role for two proteins, ANKLE2 and VRK1, in regulating neurogenesis, a fundamental process by which new neurons are generated from neural stem cells (a.k.a. neuroblasts in flies) during brain development. Further, they discovered that a Zika virus protein (NS4A) disrupts brain growth by hijacking the ANKLE2 and VRK1 -mediated neurogenesis pathway, which opens up the exciting possibility of developing VRK1 kinase inhibitors as therapeutic targets for microcephaly, particularly for congenital Zika syndrome.

The study was initiated when a patient presented with a small brain size at birth and severe abnormalities in brain structures at the Baylor Hopkins Center for Mendelian Genomics, a center directed by Dr. Jim Lupski, professor of pediatrics, molecular and human genetics at Baylor College of Medicine and attending physician at Texas Children’s Hospital.

“A few years back we performed a large genetic screen in fruit flies to identify rare mutations associated with neurodevelopmental disorders. The homologue of one of the genes, ANKLE2, was identified in a cohort of patients at the Centers for Mendelian Genomics (CMG). In a subsequent study, using fruit flies we demonstrated that overexpression of Zika protein (NS4A), causes microcephaly by inhibiting the function of ANKLE2, cell cycle regulator that acts by suppressing the activity of VRK1 kinase. However, since very little is known about the role of ANKLE2 or VRK1 in brain development, we used a multidisciplinary approach to tease apart the exact mechanism underlying ANKLE2-associated microcephaly,” said Bellen.

They found that fruit fly larvae with mutations in ANKLE2 had small brains with dramatically fewer neuroblasts and could not survive until adulthood. Experimental expression of the human version of ANKLE2 in mutant larvae restored all the defects, establishing the loss of Ankle2 function as the underlying cause.

“To understand why ANKLE2 mutants have fewer neuroblasts and significantly smaller brains, we probed deeper into asymmetric cell divisions, a fundamental process that produces and maintains neural stem cells in the developing brains of flies and humans,” said first author Dr. Nichole Link, postdoctoral associate in the Bellen lab.

Asymmetric cell division is an exquisitely regulated process by which neural stem cells (aka neuroblasts in the fly) produce a copy of the stem cell and a daughter cell programmed to a non-stem cell fate (e.g. neuron or glia).

Differential distribution of two key protein complexes marks the apical and basal domains of the stem cell which determines the fate of the daughter cells. The basal region of the neuroblast, marked by Miranda, is destined to generate neurons and glia of various lineages while the apical domain, marked by the Par complex, produces a copy of the original neuroblast. Proper asymmetric distribution and division of these determinants is crucial to ensure correct number of neurons, produce diverse neuronal lineages and replenish the pool of neural stem cells for further rounds of division.

“The cell fate determinant proteins, Par complex proteins and Miranda, were mislocalized in the neuroblasts of Ankle2 larvae. Moreover, live imaging analysis of these neuroblasts showed many obvious signs of defective or incomplete cell divisions, establishing Ankle2 as a critical regulator of differential localization of fate determinants and asymmetric cell divisions,” said Link.

To understand how Ankle2 regulates neuroblast division, they turned to its known downstream partner, Ballchen, the fly homolog of VRK family of kinases. They found Ankle2 and Ball/VRK1 act antagonistically to regulate the differential distribution of key cell fate determinants - Ankle2 restricts the expression of VRK1 kinase to the nucleus of the neuroblasts between cell divisions, keeping it “sequestered” away from fate determinants until required. “In Ankle2 mutants, instead of being strictly localized to the nucleus, Ball/VRK1 disperses throughout the entire neuroblast for most of the cell cycle - which we speculate might allow for unintended erroneous interactions and disrupt subsequent asymmetric divisions,” said Link.

Consistent with this finding, individuals with mutant versions of VRK1 and related human genes, VRK2 and VRK3, were found to have microcephaly and very small eyes. In addition, members of the Par complex and the proteins that regulate its activity were also linked to human neurodevelopmental disease in patients studied at the CMG.

Lastly, they found that NS4A expression causes microcephaly by hijacking Ankle2-Ball/VRK1 regulation of asymmetric divisions, which explains why the severe microcephaly phenotype in ANKLE2 and VRK1 patients is strikingly similar to infants with congenital Zika syndrome.

“For decades, researchers have been unsuccessful in finding experimental evidence between defects in asymmetric cell divisions and microcephaly in vertebrate models. This work makes a giant leap in that direction and provides strong evidence that links a single evolutionarily conserved Ankle2/VRK1 kinase pathway as regulators of asymmetric division of neuroblasts and microcephaly. Moreover, it shows that irrespective of the nature of the initial triggering event (i.e. Zika virus infection or congenital mutations), the microcephaly converges on the misregulation of Ankle2 and VRK1, making them promising drug targets. Another important takeaway from this work is that studying a rare disorder (e.g. those resulting from rare pathogenic variation in ANKLE2 or VRK1) originally observed in a single patient can lead to valuable mechanistic insights and open up exciting therapeutic possibilities to solve common human genetic disorders and viral infections,” said Bellen.