Wnt signaling is identified as a target in NEDAMSS disorder 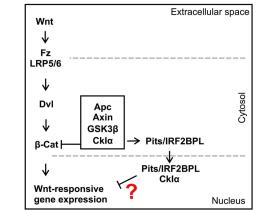 HOUSTON, TX – A recent study conducted by the researchers at Texas Children’s Hospital and Baylor College of Medicine has revealed the Wnt/Wingless (Wg) signaling pathway as the downstream target of a severe neurological disorder in children. This disorder, called NEDAMSS (neurodevelopmental disorder with regression, abnormal movements, loss of speech, and seizures), is caused by spontaneous mutations in the Interferon Regulatory Factor 2 Binding Protein Like (IRF2BPL) gene. The study, published in the journal Science Advances, is the first to identify the underlying mechanism and possible drug targets for this new disorder.

In this study, the team led by Drs. Hugo Bellen, Paul Marcogliese and Debdeep Dutta at the Jan and Dan Duncan Neurological Research Institute (Duncan NRI) at Texas Children’s Hospital employed fruit flies to dissect the biological function of IRF2BPL. They found reducing Pits (the fly version of IRF2BPL) from the neurons, led to an age-dependent neurological defect in flies, which they later found was associated with an increase in the activity of the Wnt/Wingless pathway. In collaboration with Dr. Nan Cher Yeo at the University of Alabama – Birmingham and Dr. Kathrin Meyer at Nationwide Children’s Hospital, they confirmed these findings were true in zebrafish and patient-derived cells as well.

In 2018, Drs. Marcogliese and Bellen, along with a team of researchers affiliated with the Undiagnosed Diseases Network — a National Institutes of Health-funded network whose goal is to find genetic variants responsible for previously unidentified disorders — discovered this disorder. In collaboration with Drs. Shinya Yamamoto, Michael Wangler and others at the Duncan NRI and Baylor, as well as Drs. Loren Pena and Vandana Shashi at the UDN’s Duke clinical site, they identified mutations in IRF2BPL as the cause of severe steady regression of motor and language skills in the initial cohort of five patients.

“Today, there are 31 patients identified with mutations in IRF2BPL, and this condition has been named NEDAMSS,” said co-corresponding author, Dr. Marcogliese. “IRF2BPL has been named as ‘one of the top 100’ autism candidate genes, and its variants have been implicated in early-onset Parkinsonism. However, until now, very little was known about the biological function of this gene and how its loss results in neuronal dysfunction.”

Interestingly, overexpression of Pits or human IRF2BPL in flies resulted in serrated wings and bristle loss, both of which are common when the Wnt/Wingless signaling pathway is perturbed during development. The Wnt pathway, the human counterpart of the Wingless pathway, is known to be important for the proper development and function of neurons and other organs, and its disruption results in several types of cancers. Based on many experimental observations, the researchers concluded that Pits and Wnt/Wg act in an antagonistic manner. In agreement with these observations in animal models, they found that Wnt signaling is increased in NEDAMSS patients, whose cells are known to have reduced levels of IRF2BPL.

To understand how Pits/IRF2BPL regulates Wg/Wnt pathway, the researchers performed biochemical assays and mass spectrometry, which revealed a Wnt antagonist, Casein kinase1 α, as one of the top binding partners of Pits. Further, they also confirmed genetic interactions between IRF2BPL and CkIα.

In summary, the study shows an antagonistic relationship between IRF2BPL/Pits and Wnt/Wg pathway. It also shows that under normal circumstances, IRF2BPL/Pits regulates neural function by inhibiting the Wnt/Wg pathway. However, in NEDAMSS patients, with the loss of IRF2BPL, the levels of Wnt in astrocytes — a prominent type of cells in the brain — become elevated. The researchers also showed that they can suppress phenotypes associated with the loss of IRF2BPL/Pits using Wnt inhibitors, which have proved to be safe and effective in treating many cancers.

“It used to take decades from the initial discovery of a novel gene to dissecting its biological mechanism to finding a therapy,” said the corresponding author, Dr. Bellen. “However, with the UDN’s unique approach that fosters close collaborations between clinicians and researchers working on various model systems, we were able to move from the initial identification of this mutation to a potential therapy in just three years.” Another reason we were able to progress  rapidly was due to the continued support from the iDREAM For a Cure, as well as supplemental support from the NIH for which we are truly grateful. We hope to translate these promising discoveries into a viable therapy in the future.”