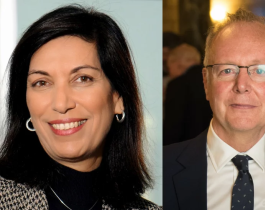 Drs. Huda Zoghbi and Adrian Bird were awarded the International Prize for Translational Neuroscience by the Gertrud Reemtsma Foundation for their pioneering discoveries on the causes of Rett syndrome.

Dr. Huda Zoghbi, director of the Jan and Dan Duncan Neurological Research Institute at Texas Children’s Hospital, distinguished service professor at Baylor College of Medicine and a Howard Hughes Medical Institute investigator, identified the MECP2 gene as the cause of Rett syndrome and studied its role in various neurons. Prof. Adrian Bird from the University of Edinburgh uncovered the role of the MeCP2 protein in the regulation of genes and generated genetically-modified mouse models that have helped significantly to further Rett syndrome research. The two researchers have made exceptional contributions towards understanding the biology of this disease, which forms the basis for new treatment options.

The International Prize for Translational Neuroscience is awarded each year by the Gertrud Reemtsma Foundation to recognize outstanding achievements in basic neurological research. It has been awarded every year since 1990 (until 2019 it was called the K-J. Zülch Prize). Drs. Zoghbi and Bird were awarded this prize on June 16 at the Bucerius Kunst Forum in Hamburg.

Learn More about the award and its previous recipients.