Home » About Us » News » Dr. Kara Marshall named a McNair Scholar by the McNair Medical Institute 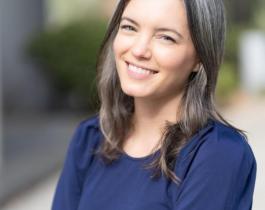 Dr. Kara Marshall, assistant professor of neuroscience at Baylor College of Medicine and faculty member at the Jan and Dan Duncan Neurological Research Institute at Texas Children’s Hospital, has been named the newest McNair Scholar.

The McNair Scholars program, launched by The Robert and Janice McNair Foundation and managed by the McNair Medical Institute, identifies and recruits the best and brightest physician-scientists in neuroscience, with a focus on neuromodulation.

“I am honored and grateful for this generous support from the McNair Scholars program. It was critical for enabling me to start my laboratory at Baylor College of Medicine and in supporting my work with the Jan and Dan Duncan Neurological Research Institute at Texas Children’s Hospital,” Marshall said.

Marshall joined Baylor in April to establish her lab focused on understanding how the brain and nervous system detect mechanical forces in the body. Although we often take it for granted, mechanical force-sensing plays a critical role in several processes, such as blood pressure control, feeding, digestion and urination. She and her team aim to uncover how your gastrointestinal tract tells your brain that you are full, what causes internal organ pain and how these internal cues affect behavior and physiology.

"Our work is inherently cross-disciplinary because we plan to investigate how the nervous system functions in many different organ systems in both health and disease. The lab will be able to delve into these exciting questions thanks to the wonderful, supportive community at Baylor College of Medicine, the NRI and within the McNair Scholars program. The breadth of excellent science done here provides so much inspiration and opportunities for collaboration," Marshall said.

This is not the first time Marshall has been a part of the Baylor community. After graduating from Texas A&M University with a Bachelor of Science in biology, she began a Ph.D. program at Baylor. During that time, she earned a Master of Science in neuroscience but later followed her mentor to Columbia University, where she completed her Ph.D. in molecular and biomedical science.

As a student, Marshall discovered a new phenomenon of rapid touch-receptor remodeling in the context of healthy skin renewal and described the anatomical and organizational structure of somatosensory neurons in the bat wing that provide sensory feedback during flight.

During her postdoctoral fellowship at the Howard Hughes Medical Institute and the Scripps Research Institute, Marshall participated in multiple projects under the mentorship of recent Nobel Laureate Dr. Ardem Patapoutian. In these projects, Marshall identified that the mechanotransduction ion channel PIEZO2, which mediates external senses like touch, also is essential for internal force sensing. Her primary work found that this ion channel mediates urinary reflexes and the sensation of bladder fullness in mice and humans.

Marshall has had several publications in high profile journals such as Nature, Science and Cell Reports. She is the recipient of prestigious awards, including being named a Kavli Fellow in 2021 and earning the Dean’s Award for Excellence in Research at Columbia University. She also has been involved in science-related community outreach to promote science education and careers.