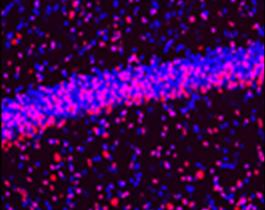 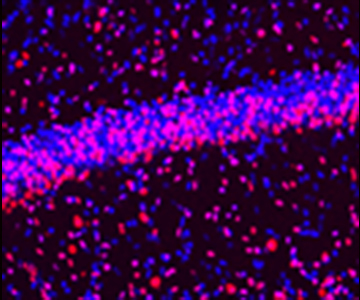 Hundreds of genetic mutations that affect a number of signaling pathways can cause autism and other intellectual disabilities. Often, opposite alterations in the same genes can result in remarkably similar clinical symptoms. The neural network mechanisms underlying this intriguing phenomenon remain unexplored.

A paper published this week in Neuron from Dr. Huda Y. Zoghbi’s laboratory at Baylor College of Medicine and the Jan and Dan Duncan Neurological Institute at Texas Children’s Hospital shows that identical abnormalities in neural circuits might underlie similar features in two distinct genetic syndromes – Rett syndrome and MECP2 duplication syndrome. It was even more exciting that deep brain stimulation (DBS) reversed these circuit malfunctions in mouse models of Rett syndrome.

The X-linked gene, MECP2, encodes methyl CpG-binding protein, a master regulator of several genes. In 1999, Zoghbi’s team discovered that loss of MECP2 function causes Rett syndrome. A few years later it was discovered that extra copies of this gene resulted in a related yet distinct neurodevelopmental disorder, MECP2 duplication syndrome.

Although structural and functional properties of individual neurons differ in both syndromes, both categories of patients suffer from similar learning and behavioral deficits such as autism and intellectual disability.

“In the end, higher-order learning and behavior does not depend on a single neuron or synapse but on how well a neural circuit functions, just like a symphony orchestra”, said Zoghbi, professor of molecular and human genetics, pediatrics, and neuroscience at Baylor, director of the NRI and a Howard Hughes Medical Investigator.

Brains of mammals consist of billions of interconnected neurons that form millions of intricate circuits, each dedicated to a specific function. The hippocampus is the region of the brain involved in learning and memory. To monitor the activity of hippocampal circuits in mouse models of Rett and MECP2 duplication syndromes, researchers generated transgenic mouse models that expressed fluorescently labeled calcium-sensors that light up in actively firing neurons.

In the brains of humans, optimal function of the hippocampal circuit relies on asynchronous and sparse firing of individual neurons, which is thought to keep them adaptable to new information. Neural circuits are maintained in this nimble state through a fine balance of excitatory and inhibitory neurons.

In contrast, researchers found that neural circuits from Rett and MECP2 duplication syndrome mouse models had increased synchrony. Further, they found that this hypersynchrony was a result of dysfunctionalinhibitory neurons, which were unable to effectively dampen excessive excitation. Excessive synchrony in hippocampal circuit has been reported previously to interfere with normal information processing, disrupt circuit dynamics and hinder learning.

“Electrical circuits in a house can be damaged in many ways – by lightning during a thunderstorm, by frayed or improperly wired cables, or if the system is overburdened with too many appliances - leading to a common outcome, electrical fires. Similarly, this study shows that different genetic mutations may disrupt neural circuits in distinct ways, but eventually, they all result in clinically comparable outcomes,” said Zoghbi.

Recently, Zoghbi, Tang and collaborators showed that applying deep brain stimulation to a specific region of the hippocampus improved learning and memory in Rett syndrome mice. Deep brain stimulation is a nonsurgical treatment wherein a specific region of the brain is stimulated using precise electrical currents with the aim of regulating abnormal activity and is being used increasingly for many movement disorders such as Parkinson’s disease

“However, it was unclear how deep brain stimulation restored normal brain activity,” said Dr. Hui Lu, postdoctoral researcher at Baylor and the lead author of this study.

In this study, researchers showed that hippocampal deep brain stimulation reversed the circuit abnormalities in mouse models of Rettsyndromes. This provides some insight into how this type of treatment improves learning, memory and cognition.

“This study raises the possibility that other autism and intellectual disability syndromes could perhaps also result from excessive synchrony in specific circuits. It would be important to evaluate the circuit properties in other neurological disorders such as Angelmann syndrome or Fragile-X syndrome because this would open up the possibility of using deep brain stimulation, and maybe other methods of neuromodulation to modify circuit function and potentially improve learning and memory in those disorders as well,” said Zoghbi.