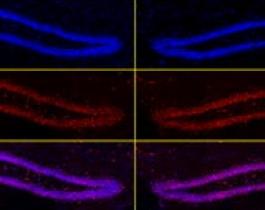 Deep brain stimulation (DBS) is the best nonsurgical treatment known so far to reduce tremors in movement disorders such as Parkinson’s and dystonia. It involves implanting electrodes within specific areas of the brain and using external electrical stimulation to regulate abnormal neuronal activity. Based on the patient’s response, DBS can be regulated or removed and is safe for clinical use.

In a recent study published in Nature, a team of NRI and Baylor College of Medicine researchers led by Dr. Huda Zoghbi, a professor of Molecular and Human Genetics, and Dr. Jiarong Tang, assistant professor of Pediatrics, have demonstrated that DBS of a specific area of the brain can revert learning and memory deficits in a mouse model of Rett syndrome, a leading cause of intellectual disability in girls.

Although DBS has shown some promise in many movement disorders and neuropsychiatric disorders in children, this is the first experimental demonstration of the effectiveness of DBS in treating a childhood cognitive disorder.

Rett syndrome (RTT) is caused by a mutation in MECP2 and manifests by the second year of life with loss in cognitive, motor and social skills. These children, most of whom are girls, lose their ability to talk, walk smoothly, and are constantly wringing their hands. There is currently no treatment for this disorder.

The NRI team used female mice carrying a single copy of Mecp2 to conduct their experiments because this model mimics the genetic defect observed in Rett patients and also closely recapitulates the clinical features of this disease.

The researchers targeted fimbria-fornix, a large arch-like structure that contains millions of axons connecting the hippocampus to other parts of the limbic system, a group of interconnected structures that regulate emotions, learning and memory. Moreover, DBS of this area has been shown previously to ameliorate hippocampus-dependent memory defects in amnesiac rats and is showing promise in early stage studies of Alzheimer disease.

They found that forniceal DBS improved only hippocampal learning and memory tasks and did not affect amygdala-based memory. Moreover, other RTT symptoms such as locomotion, anxiety, motor skills and social behavior, that do not have a forniceal origin, did not improve. This clearly shows that the effects of DBS are specific to the targeted location.

Interestingly, the team found that forniceal DBS generated many new hippocampal neurons and strengthened the connections between neurons in both normal and RTT mice, which might contribute to the observed improvements in cognition.

This preclinical study lays the groundwork for exploring the use of DBS in other animal models of neurological disorders with defects in learning and memory, and for investigating its potential as an intervention for Rett syndrome.

This paper was one of the ten "Notable Papers of 2015" selected by SPECTRUM, a leading source of news and expert opinion on autism research.