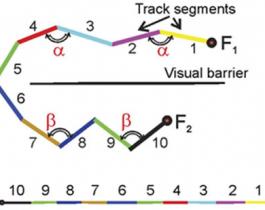 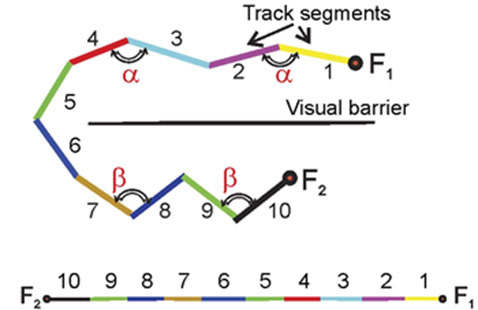 Hippocampus, a seahorse-shaped structure, is a major component of the brain and is present in the medial temporal lobe of the cerebrum. It is important for the formation and consolidation of spatial memories, orientation and navigation. Incidentally, it is also one of the first areas of the brain affected by Alzheimer’s disease and its dysfunction is most likely the reason for the loss of spatial orientation and navigational skills experienced by those patients.

A fundamental question that has remained unanswered for a long time is how does the hippocampus represent spatial information essential for navigation?

In the 1970s, it was first discovered that the firing pattern of the principal cells in rat hippocampus, the so-called place cells, may encode an internalized spatial map of the environment. Over the last few decades, many theories have been put forth to clarify the nature of the spatial information encoded by the place cells and to explain how the signals produced by individual place cells are combined to produce a global spatial map. Currently, the dominant theory is that the hippocampal spatial maps comprise detailed metrical information about an environment, similar to a street map.

A pioneering study published this month in eLife by Dr. Yuri Dabaghian and his colleagues at the Jan and Dan Duncan Neurological Research Institute of Texas Children’s Hospital and Baylor College of Medicine and University of California at San Francisco, suggests the existence of a simpler, yet elegant mechanism.

They show that place cells ignore all extraneous geometric information and merely convey a “rough and ready” topological map of the environment. In other words, the hippocampal map consists merely of a sequence of spatial locations, analogous to a city's subway map.

Just like a subway map may not give detailed information about the distances and directions but provides just enough information for a rider to go from point A to B, the hippocampal template provides an animal with a framework for rapid navigation.

To test their hypothesis, researchers measured the spiking pattern of hippocampal place cells in an environment with dynamic geometry but fixed topology. They devised an ingenious system of flexible U-shaped tracks whose shape could be easily changed from fully stretched to a compressed zig-zag configuration, while retaining its linear sequence. They found that dramatic changes in the track’s shape and length had no effect on the activity pattern of the place cells.

This implies that the animal’s hippocampus is representing the linear sequence of locations but not the geometric shape of its environment.

The results from this study not only lend support to the topological hypothesis but also provide a unifying mechanism to explain how the hippocampus performs higher-order functions such as learning and retention of visual, odor, action and emotional memories.

Understanding how the hippocampus encodes and retrieves different types of memories could help devise ways to prevent or slow the loss of cognitive skills in Alzheimer's patients.