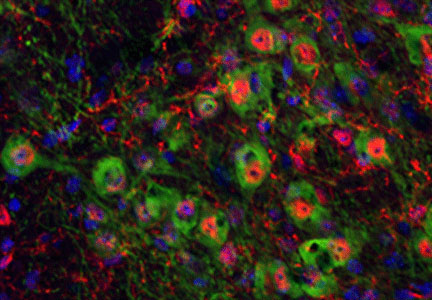 A study published in the journal eLife from the laboratory of Dr. Huda Zoghbi, investigator at the Howard Hughes Medical Institute, director of Neurological Research Institute (NRI) at Texas Children’s Hospital and professor at Baylor College of Medicine, has found a key regulator of two important proteins that have been implicated in various neurodegenerative diseases including Parkinson’s and Alzheimer’s.

Age-dependent gradual accumulation of specific proteins is a common pathological feature of many neurodegenerative disorders. Accumulation of alpha-synuclein in the neurons of Parkinson’s patients impairs motor functions. On the other hand, excessive presence of microtubule-associated protein tau is believed to be a driving force behind dementia seen in many tauopathies such as Alzheimer’s disease.

Interestingly, there are a growing number of patients with neurodegenerative conditions such as Lewy Body Dementia (LBD) and Parkinson’s Disease Dementia (PDD), who exhibit both types of symptoms – progressive dementia and motor deficits. In these patients, pathogenic forms of both alpha-synuclein and tau proteins accumulate to varying degrees and cooperatively cause massive neuronal damage.

“The second greatest genetic risk factor for Parkinson’s disease after alpha-synuclein mutations are variations in the tau gene”, says Dr. Maxime Rousseaux, postdoctoral associate in the Zoghbi lab and lead author of this study.

Interestingly, these screens independently identified tripartite motif-containing 28 (TRIM28) as the strongest specific modulator of the steady-state levels of both alpha-synuclein and tau proteins.

They found that the degenerative phenotypes caused by excess tau in fruit flies could be mitigated by partial suppression of TRIM28.

Parkinson’s disease is characterized by loss of dopaminergic neurons in the substantia nigra region of the midbrain and the accumulation of alpha-synuclein throughout the brain. The authors found that partial reduction of TRIM28 could suppress the cell loss elicited by alpha-synuclein overexpression as well as the pathological phosphorylation associated with its persistent overexpression in mouse models.

Conversely, they observed that presence of excess TRIM28 accelerated the accumulation of alpha-synuclein and tau in transgenic mice. Further, tau and alpha-synuclein formed complexes with TRIM28 that stabilized the two proteins. Surprisingly, these two proteins accumulated preferentially in the nucleus of cells and these complexes were toxic to neurons.

It is noteworthy that TRIM28 levels were abnormally elevated in postmortem brain tissues from patients who had Alzheimer’s, Parkinson’s and related disorders, consistent with its important role based on cell and animal studies. These studies were performed in collaboration with a team at the Johns Hopkins School of Medicine.

“This study has identified a specific, shared regulator of alpha–synuclein and tau in animal models. We hope that identifying this master regulator has given us a potential interventional tool to control the levels of alpha-synuclein and tau in humans. If we can decrease TRIM28 levels at an early stage, we might be able to prevent or slow neuronal loss and limit further damage”, said Dr. Zoghbi.