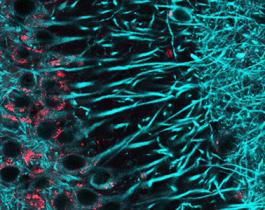 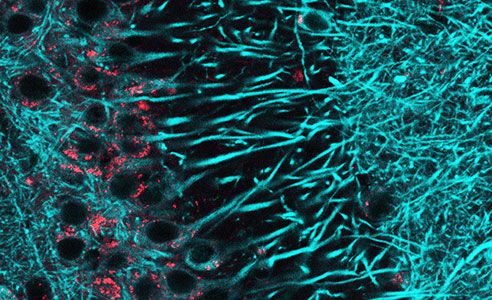 Researchers in the laboratory of Dr. Marco Sardiello, assistant professor at Baylor College of Medicine and an investigator at the Jan and Dan Duncan Neurological Research Institute (NRI) at Texas Children’s Hospital have identified a pharmacologically actionable target for juvenile Batten disease, a rare but fatal pediatric neurodegenerative disorder. The study was published in Nature Communications today.

Juvenile Batten disease is the most common form of neurodegeneration in young children. It occurs when a child receives two mutated copies of CLN3 gene from each parent, both of who may be unaffected carriers. At present no approved treatments exist for juvenile Batten disease and supportive palliative care is the only option.

Initially, these children are healthy and develop normally. They begin to show symptoms of the disease between two to 10 years of age, and usually, vision impairment is the earliest sign. This is followed by a progressive loss of vision, speech, cognitive and motor skills and is accompanied by epileptic seizures.

Similar to adult-onset neurodegenerative diseases, the hallmark pathology of lysosomal storage disorders like Batten disease is the abnormal accumulation of various macromolecules in neurons contributing to their massive death.

A dynamic cell can be compared to a large city – its usual functions generate a large amount of waste that needs to be promptly discarded and managed. Just like a city, progressive accumulation of waste can interfere with other cellular functions and eventually compromise the viability of the cell. Lysosomes are the cellular garbage disposal machines that have enzymes to degrade unwanted proteins, lipids and other macromolecules back into constituent components, to be reused or discarded.

Disruptions in waste management adversely affects all cells but neurons are particularly vulnerable to them. In juvenile Batten disease patients, CLN3 mutations prevent lysosomes from efficiently clearing the harmful debris within neurons. Previously, Dr. Sardiello and colleagues had identified transcription factor EB (TFEB) as a master regulator of the biogenesis and function of lysosomes. Subsequent studies by many researchers in the rodent models of different neurodegenerative diseases like Alzheimer’s and Parkinson’s have shown that expression of additional copies of the TFEB gene using engineered viruses can increase cellular clearance and reduce neuronal degeneration.

Finding a way to pharmacologically activate TFEB protein has been a long-standing goal in the field of juvenile Batten disease and many other neurodegenerative diseases.

It was known that reducing the target of rapamycin (mTORC1) activity could increase TFEB activity. However, administration of rapamycin, an FDA approved allosteric inhibitor of mTORC1, showed little or no activation of TFEB.

In response to this, Dr. Sardiello and colleagues undertook this study to find alternative non-mTORC1 targets that can be pharmacologically regulated to activate TFEB. It had been well documented that administration of a sugar molecule, trehalose, enhanced cellular clearance in an mTORC1-independent manner.

In this study, Sardiello’s team asked if trehalose administration could also improve symptoms of Batten disease. They found that trehalose administration not only increased the life span of CLN3 mutant mice but also reduced brain atrophy, neuroinflammation and accumulation of ceroid lipopigments, a hallmark of juvenile Batten disease. Importantly, they found trehalose mediates these effects by inhibiting Akt kinase, a well-known modulator of many metabolic pathways.

Based on their many elegant experiments, they concluded that under normal conditions, presence of active Akt kinase keeps TFEB sequestered in the cytosol in an inactive form. Treatment with trehalose inhibited Akt, which in turn allowed TFEB to be translocated to the nucleus, where it was able to activate the degradative pathways.

Thus, this study has shown for the first time that inhibition of Akt kinase is an effective strategy to increase cellular degradation and attenuate neurodegenerative symptoms in juvenile Batten disease.

The authors were excited by this discovery because kinases are among the most popular group of drug targets because they can be selectively inhibited with small-molecule inhibitors. In fact, inhibitors of Akt kinase have been studied extensively in the context of various cancers and a few of them are already under clinical development.

Sardiello’s team used one such inhibitor, MK2206 that is also known to cross the blood-brain barrier to demonstrate that Akt inhibition can indeed activate TFEB and the lysosomal system in the mouse brain. When treated with MK2206, cells derived from patients affected by juvenile Batten disease or other lysosomal storage disorders showed increased clearance of the abnormally accumulated cellular debris.

Another exciting possibility that emerges from this study is Akt inhibition could also be explored as a viable therapy for other lysosomal storage diseases and adult-onset neurodegenerative disorders, such as Alzheimer’s and Parkinson’s, which are currently incurable.

This work was supported by NIH grant NS079618, grants from the Beyond Batten Disease Foundation, March of Dimes Foundation grant #5-FY12-114, and a King’s College London Graduate School International Studentship.