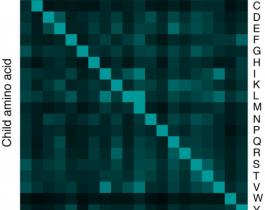 Researchers in the laboratory of Dr. Marco Sardiello, assistant professor at Baylor College of Medicine and investigator in the  Jan and Dan Duncan Neurological Research Institute at Texas Children’s Hospital, have developed a new web tool called Aminode that will help researchers analyze and predict proteins’ evolutionarily conserved regions (ECRs). Aminode was developed by a Rice University senior, Kevin Chang and a Rice alum, Junyan Gao, in collaboration with Baylor’s postdoctoral associate, Alberto di Ronza in Sardiello lab at the NRI. The study describing this tool was published in Nature’s Scientific Reports.

Evolutionarily constrained regions (ECRs) are hallmarks of the most functionally critical domains of a protein. Most parts of the genes and proteins undergo various changes over the course of evolution, however, ECRs appear to be refractory to those changes and have remained unchanged across different species. Even a single amino acid change in the ECR can cause a genetic disease.

So, researchers in the Sardiello lab hypothesized that the analysis of these regions can provide valuable insights into the native structure of a protein and also provide a clue about potential deleterious biological outcome(s) of certain mutations.

ECRs can be inferred by comparing the amino acid sequences from multiple protein homologs in the context of the evolutionary relationships that link the analyzed proteins. However, compilation and analysis of these large datasets requires special bioinformatics skills and is very time-consuming. This limits the use of ECR analysis in the biomedical community.

To circumvent this issue, researchers in Sardiello lab pre-loaded Aminode website with the results of analysis of the whole human proteome compared with the proteomes from 62 additional vertebrate species. Profiles of the relative rates of amino acid substitution and ECR maps of human proteins can be easily searched and downloaded.

Aminode can be used for custom analyses of protein families of interest and is unique in using evolutionary conservation data between species for predicting potentially pathogenic mutations.

The Sardiello lab hopes this tool will help other researchers and clinicians predict which protein regions can be modified for experimental purposes without altering protein function and, more importantly, point out potential pathogenicity of variants of unknown significance, both of which will accelerate the pace of scientific discovery.

For large genes, the researchers say that analysis that used to take one week can now be completed in less than a second using Aminode.

Read how Aminode was developed