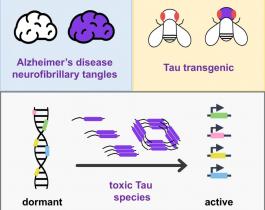 A recent study published in Cell Reports has found a novel mechanism by which Tau protein aggregates might contribute to neurodegeneration. In this collaborative study, researchers found numerous transposons (a.k.a jumping genes) were activated in the brains of deceased subjects affected by Alzheimer’s disease (AD). Further, using fruit fly models of AD they showed Tau protein is sufficient to activate transposons contributing to genomic instability that likely, triggers neurodegeneration.

In this study, researchers developed a new software tool to detect signatures of active transposons in a rapid and efficient manner. Using this tool, they analyzed postmortem brains from 636 deceased subjects for changes in the expression of 547 different transposons. Then they performed statistical analyses to compare the level of active transposon elements to the amount of Tau aggregates in each brain. They found a strong correlation between the amount of Tau aggregates in neurons and the activity level of transposable elements.

Next, to determine if Tau proteins can biologically induce activation of transposons, they tested the activity of transposons in fruit fly models of Alzheimer’s disease. Similar to human brains, Tau strongly activated transposable elements in flies. Based on these results, they hypothesize transposon activation and resulting genomic instability could be one reason why neurons degenerate and die prematurely in the brains of Alzheimer’s patients.

The accumulation of tau aggregates in various brain regions is a hallmark pathological feature of Alzheimer’s disease and several less common neurodegenerative diseases. Previous studies on human postmortem brains and animal brains have found that neurons in Alzheimer’s disease and other neurodegenerative diseases show signs of genomic instability, which refers to increased errors in the genetic material that can have deleterious consequences for the function of neurons. One manifestation of genomic instability in Alzheimer’s disease is the unraveling of the tightly coiled DNA structure, permitting abnormal activation of genes that are usually silent and increasing vulnerability for DNA strand breaks.

One plausible explanation for global genomic instability observed in Alzheimer’s patients is the inappropriate activation of transposons, which are short DNA pieces that have accumulated in massive numbers in most genomes over the course of evolution. Like viruses, transposons can make numerous copies of themselves, jump around the genome and insert in various locations. They make up almost half of the human genome and contribute to population-wide genetic variability, including disease-causing variants. The vast majority of transposons in human genomes are no longer capable of “jumping,” but a small number remain potentially active, including within the brain.

Aberrant activation of transposons can cause large-scale genomic rearrangements, mutations at the site of insertion, and can also independently trigger the brain to mount its natural defense responses, all of which are highly damaging to the neurons.  To prevent this, many tightly regulated surveillance mechanisms have evolved to ensure that transposons are usually kept dormant.

While researchers have observed activation of transposons in certain age-related neurologic disorders (e.g. amyotropic lateral sclerosis, Rett syndrome, multiple sclerosis), a systematic evaluation of transposon activity in Alzheimer’s patients had not been undertaken so far.

The researchers hope that this study will stimulate others in the research community to delve deeper to understand if and how tau-mediated transposon activation and genomic instability contributes to neurodegeneration, since these investigations could lead to new treatment paradigms for Alzheimer’s disease.