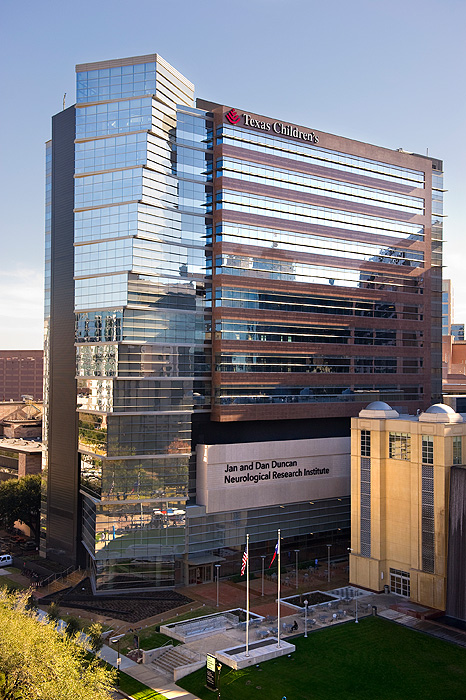 Neurological disorders strike at the core of our identity. As a group, they are shockingly prevalent. It is estimated that one billion people around the world suffer from some form of neurological disease.

Less than a generation ago there was little hope for treating most of these disorders, but we are beginning to better understand the brain's resilience and its capacity for renewal. We are acquiring new tools to illuminate neurological function and dysfunction, and more scientists and clinicians are studying these disorders than ever before. We are, in short, on the cusp of a new era in biomedicine.

To meet this moment of opportunity, Texas Children's Hospital and Baylor College of Medicine opened the Jan and Dan Duncan Neurological Research Institute (Duncan NRI) in 2010. Building on our considerable strengths in genetics, neuroscience and pediatrics, the Duncan NRI is designed to foster a multidisciplinary, collaborative environment that will facilitate fundamental discoveries in neuroscience with the ultimate goal of translating them to therapies for many incurable neurological and neurodegenerative conditions.

Currently the Duncan NRI is home to more than 25 principal investigators and 200 scientists in 10 core labs, including the Gordon and Mary Cain Pediatric Neurology Research Foundation Laboratories, focused on epilepsy research.

Since inception, more than 300 scientific studies have been published, more than 40 disease-causing genetic mutations have been discovered or co-discovered by our scientists, and promising clinical trials for Rett syndrome and tuberous sclerosis complex have been launched as a result of our research. 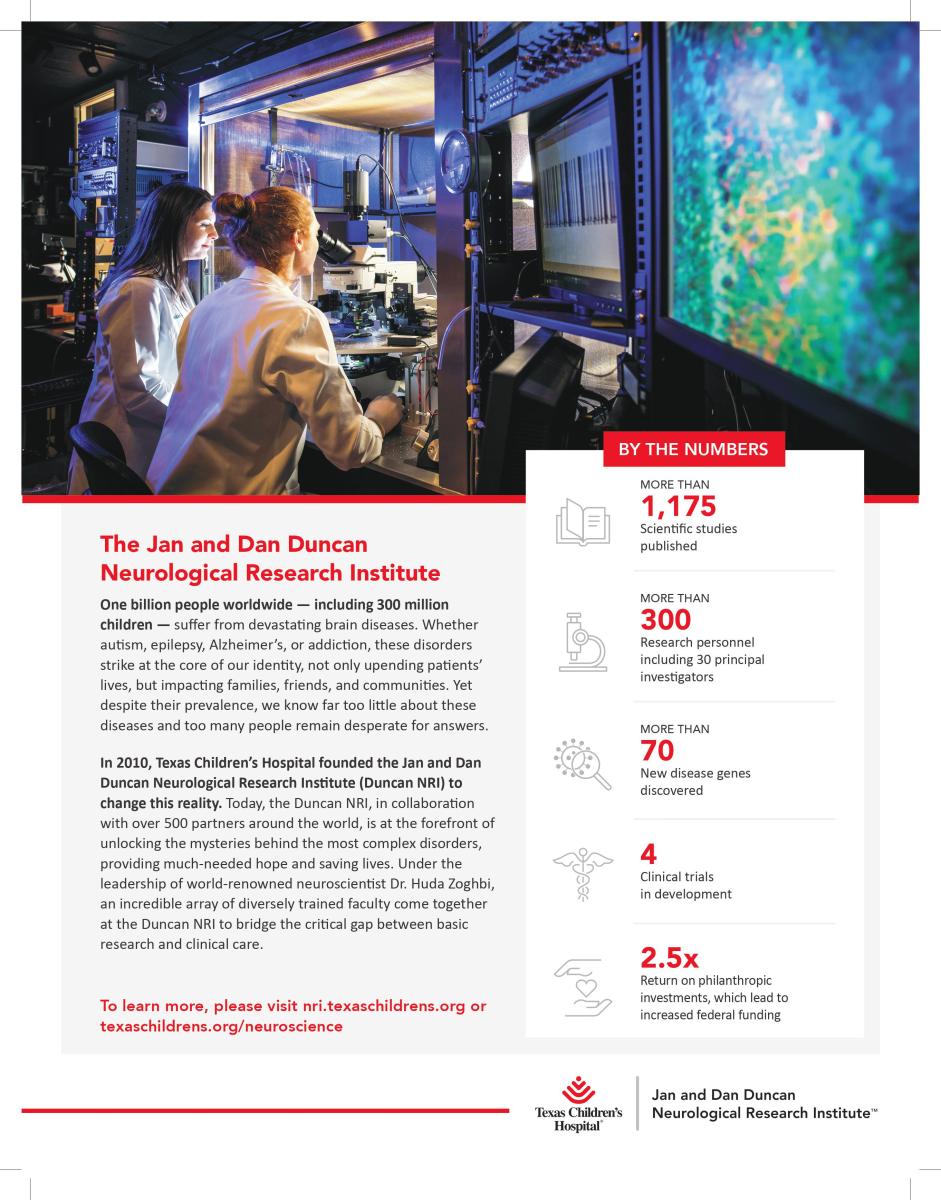 The unique features of the Duncan NRI that make rapid progress in translational research possible are:

The Texas Medical Center (TMC) is the largest in the world, and its institutions treat about 6 million patients each year. The 344,000 square foot silver-level LEED-certified Duncan NRI building, nestled in the heart of the TMC, houses Baylor College of Medicine and Texas Children's Hospital researchers working on neurodevelopment and neurological diseases under one roof and provides space for us to recruit investigators with complementary areas of expertise.

The Duncan NRI also physically links Baylor College of Medicine and Texas Children's Hospital to M.D. Anderson Cancer Center, where our University of Texas collaborators lend strength in developmental biology and epigenetics. Most importantly, Duncan NRI's location adjacent to the hospitals fosters relationships between the lab and the clinic, which are integral to the translational research enterprise.

The Duncan NRI-sponsored programs such as monthly disease-specific dinner seminars bring together faculty from various institutions and disciplines who might otherwise never encounter each other, allowing them to discover common interests and forming a dynamic intellectual network in which ongoing conversations serve as a catalyst for creativity and insight.

At a time when many institutions are reducing their investment in basic research infrastructure, the Duncan NRI is enriching our environment by providing core labs to specifically support translational neuroscience research. These core labs provide expertise generating engineered mice, RNA in situ, neuropathology, slice and in vivo neurophysiology, neuroimaging, animal EEG, mouse behavior, bioinformatics, microscopy (confocal, two-photon and electron) and pharmacology/drug trial design to all Duncan NRI labs and others.

Texas Children’s/Baylor researchers, with support from NIH institutes, the Howard Hughes Medical Institute, several disease foundations and philanthropic donors, have long been at the forefront of understanding numerous neurological and developmental disorders. We discovered or co-discovered the genetic basis of Fragile X (A and E) syndromes, Angelman syndrome, Rett syndrome, myotonic dystrophy, Goltz syndrome, incontinentia pigmenti, several inherited ataxias, several inherited neuropathies, and numerous other neurological and neuropsychiatric syndromes. We have created animal models for many of these disorders, and we are already using some of them to develop therapeutic interventions.

Donate to support the world-class research programs of our scientists.