Home » About Us » News » Dr. Christian Schaaf presents "The Power of Patient No.1" 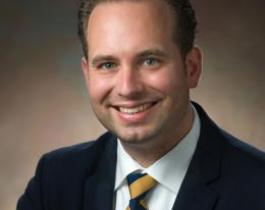 Dr. Christian Schaaf presents "The Power of Patient No.1"

Dr. Christian Schaaf presented a ‘TED-style’ talk in Charlotte, North Carolina at the 2018 annual meeting of the American College of Medical Genetics and Genomics (ACMG), a professional society of biochemical, clinical, cytogenetic, medical and molecular geneticists, genetic counselors and other health care professionals who are committed to the practice of medical genetics.

In 2014, Dr. Christian Schaaf, professor for Clinical Genomics and medical director of Clinical Genetics at the University of Cologne in Germany and visiting professor at the Jan and Dan Duncan Neurological Research Institute (NRI) at Texas Children’s Hospital and Baylor College of Medicine, co-discovered this syndrome with Dr. Danielle Bosch, clinical geneticist in training at the University Medical Center in Utrechet, Netherlands, and Dr. Nienke Boonstra, senior researcher at the Radboud University Medical Center in Nijmegen, Netherlands.

The discovery, published in the American Journal of Human Genetics, was based on a study conducted on six individuals who presented with similar symptoms - poor vision due to congenital atrophy of the optic nerve, developmental delays and mild intellectual disability. The pioneering study, conducted with the support of the NRI, found all affected individuals carried either missense mutations in NR2F1 gene or deletions in the chromosomal region where NR2F1 gene is located.

NR2F1 encodes for a nuclear receptor protein that regulates the expression of many other genes. They found disrupting the regulatory region (i.e. the DNA-binding domain) of NR2F1 affected the normal development of the visual system and disrupted axonal projections to certain brain regions. The mutations in NR2F1 gene were found to be the cause of the overlapping symptoms in these patients.

Later, the Online Mendelian Inheritance in Man (OMIM), a comprehensive, authoritative online compendium of human genes and genetic phenotypes, classified this neurological condition as a new syndrome and named it the Bosch-Boonstra-Schaaf Optic Atrophy Syndrome (BBSOAS).

A recent study from Dr. Schaaf’s lab has expanded the genetic and phenotypic spectrum of this disorder. They found novel loss-of-function mutations in COUP transcriptional factor-1 protein (COUP-TF1) were responsible for other clinical symptoms of BBSOAS such as poor muscle tone and stroke-like episodes.