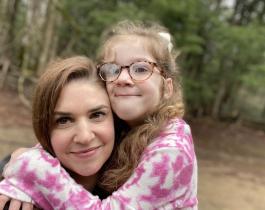 Finding the right diagnosis for one child can help millions more

By the time Collette was four months old, she had failed to reach major developmental milestones and was starting to show symptoms that were increasingly worrisome to her parents and doctors. She could not roll over, had difficulty swallowing and holding her head up, and did not cry. Over the next several months, her concerned parents consulted numerous specialists who performed a battery of tests; none resulted in any answers, leaving her family feeling helpless and frustrated.

Finally, in 2015, Collette’s parents brought her to Texas Children’s Hospital to be evaluated by a pediatric neurologist, Dr. Hsiao Tuan Chao, who is also an investigator at the Jan and Dan Duncan Neurological Research Institute. Around this time, Dr. Chao and her colleagues at the Duncan NRI initiated a collaboration with the national Undiagnosed Diseases Network (UDN) team to find a diagnosis for another child’s mystery illness, which had recently led to the discovery of a novel disorder called EBF3-related hypotonia ataxia and delayed development syndrome (HADDS). The similarities in disease presentation and overlapping symptoms between the two children led Dr. Chao to suspect that Collette might have this syndrome as well. To confirm her hunch, she recommended that Collette undergo additional genetic testing with clinical exome sequencing. The testing confirmed that she carried a variant in the EBF3 gene that was predicted to disrupt the gene function.

“The gene discovery story of EBF3 illustrates the ‘power of one’ in medicine and biomedical research,” said Dr. Chao.“It shows how a single patient with an undiagnosed disorder (a ‘medical mystery’) can lead to the discovery of the gene responsible for a previously unknown disorder. Usually, this is the starting point for researchers like us to develop diagnostic tests and therapies. Another important immediate benefit for patients and their families who receive a genetic diagnosis for a previously unknown condition is that these patients can then finally qualify for disability services, therapies, and other medical interventions. They and their families also benefit immensely by becoming a part of a supportive and growing patient and family community.”

This incredible discovery has had a significant impact on Collette and her family, as well as hundreds of other children and adults around the world who have since been diagnosed with the same condition. In 2017, armed with this new diagnosis, Collette’s family founded a Facebook family group for HADDS parents and, eventually, the EBF3 HADDS Foundation. This international close-knit community has now developed into a powerful family support/advocacy network that provides strong support to each other and helps researchers and physicians understand this condition and find interventions for HADDS patients.

In 2017, the Duncan NRI team led by Dr. Chao and Dr. Michael Wangler was instrumental in the opening of the first-ever clinic for EBF3-related HADDS and 10q26-deletion disorders at Texas Children’s Hospital that currently accounts for the largest number of individuals with EBF3-related disorders at a single site worldwide. Moreover, since the discovery of HADDS and the recognition that EBF3 gene deletions contributed to the previously known 10q26-deletion syndrome, Dr. Chao’s lab has focused on understanding its natural history, neurocognitive, and neuropsychiatric consequences, along with the underlying causative mechanisms in model organisms. Their ultimate goal is to develop targeted treatments for children like Collette and accelerate autism and ataxia research.

“As a part of the largest children’s hospital in the country, the Duncan NRI is uniquely positioned to take discoveries from the lab and to apply them to patients in the clinic,” said Dr. Ashley LeMaire, Collette’s mother. “HADDS families have come to view clinic visits at Texas Children’s as an indispensable experience of our children’s medical journey and an invaluable resource. These visits give us hope and empower us with a wealth of knowledge about this brand-new disorder, which we can then share with our local health care providers, therapists, and educators, many of whom are not aware of this new disease or have not interacted/treated a HADDS patient before.”