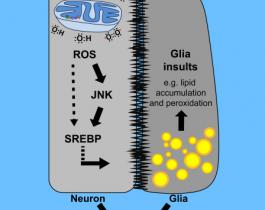 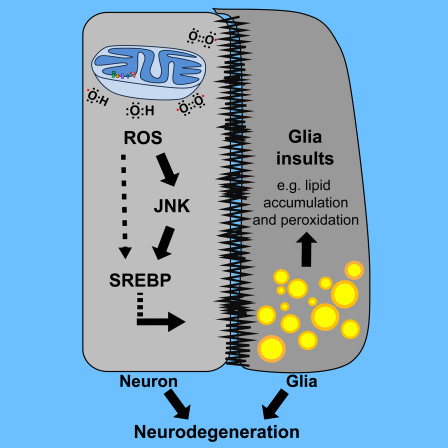 Lipid droplets (LD) are cellular organelles that consist of lipid (fat) core that is enclosed by a phospholipid layer to which proteins are bound. In higher animals, they are concentrated in the liver and adipose tissues, although they have been isolated from other tissues as well.

LDs are dynamic organelles that play an important role in intracellular lipid metabolism and storage. Changes in fat metabolism have been observed in few neurodegenerative conditions including Alzheimer’s, Parkinson’s, Amyotrophic Lateral Sclerosis etc. However, neither their presence nor a causal relationship between their accumulation and neurodegenerative diseases has been documented, so far, in patients or in laboratory animal models.

A ground-breaking study conducted in the lab of Dr. Hugo J. Bellen, an HHMI investigator, professor in the departments of Human and Molecular Genetics and Neuroscience, Director of the Program in developmental Biology at Baylor College of Medicine, and investigator at the Neurological Research Institute (NRI) of Texas Children’s Hospital has now identified a novel signaling mechanism that allows for accumulation of LDs in glial cells causing neurodegeneration.

Specifically, they found that dysfunction of neuronal mitochondria (cellular energy generator) cause excess lipids to accumulate in the neighboring glial cells (support cells) in fruit flies and mice. They show that the combined presence of oxidative stress and lipid droplets promote neurodegenerative conditions in flies and mice. A clinically promising finding from this study is that reducing the number and amount of these lipid droplets delayed the onset and partially alleviated signs of neurodegeneration in these animals.

The Bellen lab is interested in understanding the molecular mechanisms that underlie neurodegeneration and they use fruit fly mutants of evolutionarily conserved genes to elucidate the pathways. They found that three independent fly lines that were defective in functionally distinct mitochondrial genes resulted in elevated levels of lipid droplets in glia, neuronal support cells. Interestingly, mutations in human homologs of these genes cause Leigh syndrome, Charcot-Marie-Tooth type2-A2 (CMT2-A2) and autosomal recessive spastic ataxia with leukoencephalopathy (ARSAL).

Upon further investigation, Lucy Liu, a graduate student in Dr. Bellen’s lab found that in these mutants, mitochondrial dysfunction increased neuronal reactive oxygen species (ROS). As a response to this oxidative stress, neuronal activity of c-Jun-N-terminal Kinase (JNK) and Sterol Regulatory Element Binding Protein (SREBP), a transcription factor that controls lipid synthesis, were elevated. This increased the production of lipids in neurons that were then transferred by an unidentified mechanism to the neighboring glial cells.

Interestingly, while many cellular stresses/cues can trigger the production of ROS or activate JNK/SREBP signaling pathways in neurons, researchers found that a combination of elevated ROS and JNK/SREBP activity is required for glial LD accumulation.

The authors found that a reduction of ROS, JNK, SREBP or lipid droplets by genetic or pharmacological means was sufficient to delay neurodegenerative phenotypes in mitochondrial fly and mouse mutants. This is because in the presence of excess ROS, lipids undergo “peroxidation”- a cascade of reactions resulting in highly unstable compounds that modify important proteins and alter the cellular chemical balance affecting the health of the cells. While reduction of lipid load in either neurons or glia was sufficient to delay neurodegenerative effects caused by functionally defective mitochondria, combined reduction of LD in both tissues was more potent.

Reduction of glial lipid droplets may be clinically relevant

Importantly, since deposition of these lipid droplets occurs before the onset of clinical symptoms of neurodegeneration, this study opens up an exciting possibility of using glial LD accumulation as an early diagnostic biomarker to identify people who are at a higher risk for neurodegenerative diseases.

It is also worth noting that administration of a brain-permeable antioxidant successfully delayed the onset and severity of clinical signs of neurodegeneration in a mice model of Leigh syndrome as well as in fly models of Leigh syndrome, CMT2-A2 and ARSAL.

Thus, it appears that measurement of excess lipid droplets in glia could be used as a reliable early biomarker for identifying neurodegeneration in Leigh, CMT2-A2 and ARSAL patients while reducing excessive glial LDs could be a viable therapeutic approach for these patients.