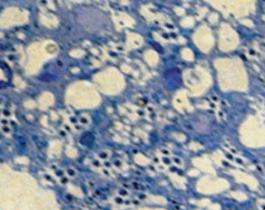 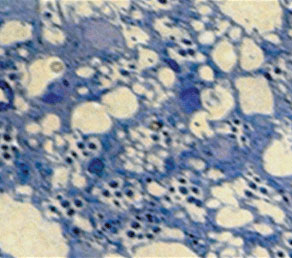 An international team led by Dr. Hugo J. Bellen, professor at Baylor College of Medicine and the Jan and Dan Duncan Neurological Research Institute (NRI) at Texas Children’s Hospital has identified a novel function for nardilysin, a mitochondrial protein, in the progressive degeneration of neurons. The study published in Neuron has utilized a relatively new multi-species genomics approach to provide a compelling genetic link between NRD1 and age-related neurodegeneration.

The project was initiated by Dr. Wan Hee Yoon, postdoctoral researcher in the Bellen lab and first author, on the basis of a genetic screen in fruit flies designed to identify new genes whose loss causes neurodegeneration. Fruit flies lacking Nardilysin (NRD1) display a progressive loss of photoreceptor neurons. Upon further analysis, he found that NRD1 is enriched in mitochondria, the energy generators of the cell.  The mitochondria also contain enzymes like a-keto (oxo)glutarate dehydrogenase (OGDH), critical to generate intermediates involved in the production of cellular energy and other processes.

Typically, mitochondrial enzymes such as OGDH are complex multi-unit entities that need ‘chaperone’ proteins to properly fold, assemble and function. The team found that NRD1 was crucial for proper folding and stabilization of OGDH.  Interestingly, loss of NRD1 did not affect energy production or produce excessive reactive oxygen species. Rather, loss of OGDH activity, in Nrd1 or Ogdh mutants, resulted in specific accumulation of the substrate of this enzyme, a-ketoglutarate (a-KG).

Increased a-KG has been previously shown to activate mammalian Target of Rapamycin (mTORC1), a protein complex that acts as a cellular sensor of energy and nutrients. Low activity of mTORC1 is a sign that cellular energy and nutrient reserves are being depleted. Cells overcome these deficiencies by increasing autophagy, a lysosomal degradative process by which proteins and protein aggregates are broken down thereby resulting in the regeneration of building blocks i.e. amino acids are used to produce energy or build crucial nutrients.

On the other hand, higher activity of mTORC1 inhibits autophagy, halting the recycling but also causing a progressive buildup of protein aggregates. Aging neurons are especially vulnerable to excess cellular debris and disruptions in autophagy have been implicated in neurodegenerative conditions.

In collaboration with Dr. James Lupski’s group at the Baylor College of Medicine and Dr. Stan Nelson at the University of California Los Angeles Clinical Genomics Center, they identified two patients with pathogenic mutations in OGDH-like and NRD1 each. Both patients presented with similar symptoms – inability to walk, eat, and speak, and a general slow progressive disintegration of the brain (an acquired microcephaly). Closer examination showed that one of the patients had a rare, loss-of-function homozygous truncating mutation in NRD1 whereas the other undiagnosed patient carried a point mutation in a functionally critical domain of OGDHL.

Expression of the normal human versions of NRD1 and OGDH restored certain phenotypes observed in the corresponding fly mutants whereas the human mutant versions of NRD1 and OGDH were unable to replace the fly mutations, indicating functional conservation of these genes across species. The most exciting observation is that treatment of Drosophila mutants of Nrd1 or Ogdh with rapamycin reverted some of the neurodegenerative symptoms.

Thus, this study has identified a novel mitochondrial function for nardilysin, identified the enzyme OGDH as a target for nardilysin, discovered a new mechanism to regulate autophagy, and demonstrated the involvement of NRD1/OGDHL in neurodegeneration in fruit flies and humans.

Most importantly, this study has opened avenues that can be further explored and validated to develop a therapeutic strategy for patients with NRD1 or OGDHL mutations.